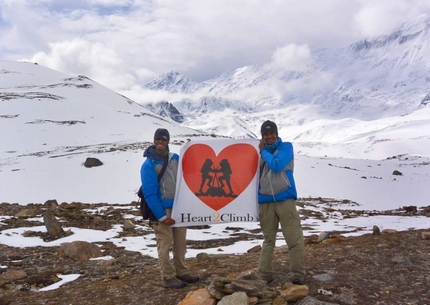 Last year, good friends Ashok Kumar and Ashik Ashokan thought of a way to raise funds for the Society for the Physically Disabled (SPD), but couldn’t get people to support their idea.

“It was hard to reach out to people as they had never heard of us. We had to speak to a lot of people about our cause, do up a social media page and even design a website, for which we had no skills and had to learn from scratch,” said Mr Ashokan, a communications and new media student at the National University of Singapore (NUS).

The two 24-year-olds, who were schoolmates at Innova Junior College, said the idea to climb mountains for a cause came after they scaled the 3,210m-high Poon Hill in Nepal in May 2013. They completed the climb without proper winter wear and survived on only one meal a day.

When they came back, they were featured in Tamil Murasu and a show on Vasantham Central, where they shared their gruelling experience of climbing the mountain.

They then decided to embark on a project to trek 220km in the Nepali Himalayas to raise funds for the SPD, last year.

Going by the name Heart2Climb, the duo chose that particular beneficiary as they felt that their trek reflects how the “disabled literally have to climb mountains each day”.

The cause has since raised over $50,000 on www.heart2climb.com and will support the various programmes run by CCF to help the children and their families with their educational and medical expenses.

The experience hasn’t been easy for the two friends, who said they had to endure harsh temperatures of more than 40 deg C at the bottom and sub-zero temperatures at the peak. They also don’t engage porters to help them carry their equipment up and down the mountain. Hence, they carry a load of 15kg which makes the whole process of climbing an “excruciatingly painful experience”.

Explained Mr Kumar, a business student at the Singapore Institute of Management: “High altitude mountaineering requires good fitness and that in turn requires hours of intense training. We faced a huge problem juggling our studies and finding time to train. Our days were packed and we had to sacrifice time spent with family and friends.”

Despite that, the undergrads also set aside time to provide mentorship and advice to schoolmates and friends who have started their own fundraising events.

One particular event that was directly inspired by them is a vertical marathon in January, organised by students from the College of Alice and Peter Tan at NUS titled Heart2Climb. Participants of the marathon, which raised funds for the SPD, had to climb up and down 17 floors of two buildings in the school.

The inspirational figures, who have a passion for mountaineering and raising funds for charity, said: “Mountains are a beautiful metaphor to show human struggle and as we climb it, it portrays our willingness to help the underprivileged in our society as we’re putting ourselves at great risks and facing life or death scenarios.”