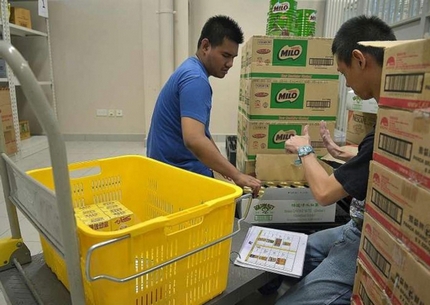 The 50 for Fifty charity drive, which had 50 young people raise $3.5 million in just three months last year, is back, but organisers have their eye on more than just money this time round.

Co-founder Rebekah Lin, 30, said she wants to create projects that go beyond raising awareness or funds and can be sustained even after the latest run of the charity drive, which was launched last month, ends in March next year.

One such project is a food packing job outsourced by Samsui Supplies and Services – a Soup Restaurant subsidiary – to the Movement for the Intellectually Disabled of Singapore (Minds).

Under this, 20 intellectually disabled trainees pack dry food items for 17 Soup Restaurant outlets across Singapore and get paid for their efforts. Ms Lin intends to take this project further.

“We want to find 30 to 50 offices and get them to order their pantry stock from these people instead of buying their sugar and Milo from supermarkets,” she said.

Samsui Supplies is building a website that lets companies place their orders easily, Minds will provide the manpower, while Ms Lin’s staff will approach companies about pantry orders.

This model differs from last year’s, where each youth adopted a charity and raised money for it. Some held ticketed music events, others collected unwanted handbags from friends and sold them to raise funds.

But Ms Lin said some volunteers had “felt stressed by the fund-raising and couldn’t focus on working with the charities”.

“But we know that fund-raising is still important,” she said.

Therefore, 50 for Fifty will take care of the fund-raising this time round. The target is to get 50 companies to donate $10,000 each – a figure that will double after the one-for-one matching under the Care and Share movement.

“This way, it is fair across the board for all the charities since each will get about $20,000,” Ms Lin said.

Instead of having only individuals under age 35, the charity drive this year will include businesses from hair salons, radio stations to magazine stands.

Ten “changemakers” from last year are continuing with the charity drive this year.

One of them is Ms Brenda Eng, 27, owner of Balloon Blasters, which sells balloons.

Last year, she raised $136,000 for widow support group Wicare and is hoping to do more for the same charity this year.

“I will create a video based on one of the widows, so that we can share it and raise awareness of Wicare on social media,” she said.