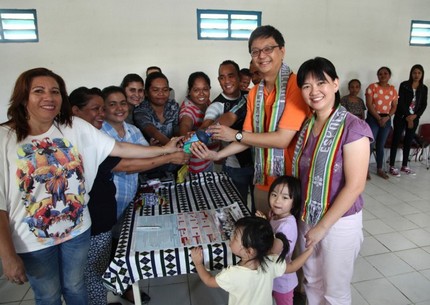 Life is not about coming out on top in the rat race or achieving the best academic results.

That is what the Tan family learnt when they dropped everything for a year and left Singapore to volunteer at Shallom School in poverty- stricken Timor Leste.

When Mr Wilson Tan, 43, a director of marketing for cyber security at a telecommunications company, told his boss of his plan, he was asked: “Singapore has many needy people too, why go there?”

It was to do more for a community in which he and his wife Soo Fern, 41, had volunteered before through their church.

Even though their parents feared for their safety, the couple felt it was a calling. Their daughters, Anastasia, four, and Naomi, two, followed them.

Almost half of Timor Leste’s one million population live below the poverty line and about a third are illiterate. Break-ins and street violence are common occurrences.

Mr Tan was an education consultant for the school, showing teachers how to use tablets to teach and to incorporate them into their lessons. He also held critical thinking lessons, challenging teachers to look beyond their circumstances and to plan for the future.

His wife cared for their daughters and taught English to the school’s principal in her free time.

They volunteered there from March last year to March this year with their church, Agape Baptist Church, which provided the tablets. Not many would dare to put their lives on hold for an entire year.

Before he set off, Mr Tan thought he had all the answers to the problems faced by the community. Instead, he learnt more about life and what it means to have less.

“I grew in my respect for them and learnt important lessons, receiving from the locals, learning from their culture and coming to understand – not just empathise with – their perspective,” he said.

The family had to learn the Tetun language twice a week and lived without high-speed Internet, air-conditioning and other luxuries. They also learnt to be flexible and adapt to their surroundings.

Roads could get cordoned off without warning and floods would leave people stranded.

“You can’t even choose what to cook. You have to see what you can get and then decide,” said Mrs Tan.

The couple’s time there influenced their parenting style, which now focuses less on studies and more on character-building.

The people of Timor Leste possess strong character and do not allow their circumstances to stop them from living, Mr Tan noted.

He hopes he has done enough to advance education there.

“We hope that with the knowledge, they can break out of the poverty circle by going on to university and so on,” he said.

A video of the family’s time in Timor Leste has been published on the Our Better World website (www.ourbetterworld.org).

Our Better World is a Singapore International Foundation initiative that tells stories of people doing good in Asia in order to encourage others to contribute.

Mrs Tan hopes it will inspire others to volunteer, be it here or abroad. “The way I see it is that if everybody can just give a little, then the world would be a better place.”