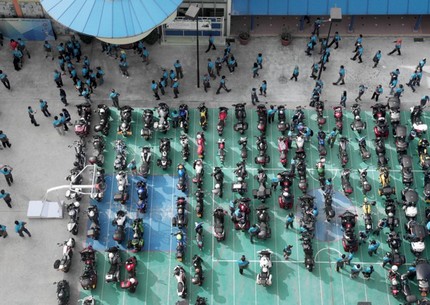 More than 150 motorcycles swept into the Eunos Crescent and Joo Seng Road estates yesterday morning and the riders dismounted to help springclean 50 rental flats in the area.

In all, 350 participants took part in this year’s Wheels of Love (WOL) event, an annual charity event involving bike enthusiasts. They were from 13 motorcycle clubs in Singapore.

Clinic nurse manager Kelly Ho, the founder of Sheriders Chapter, a motorcycle club for female motorcyclists, brought eight other members as well as her teenage son to help out.

Ms Ho, who is in her 30s, said: “It wasn’t very hard to get the ladies to join because they are doing a good deed.”

For over an hour yesterday, the volunteers cleaned 50 rental flats ranging from one-room to three-room flats.

The charity event, which is sponsored by motorcycle spare parts company Chong Aik International, chose 50 units this year because of SG50.

New efforts have been implemented every year such as helping out at the Jamiyah Children’s Home in 2013 and painting selected residential units in Taman Jurong last year.

The event has grown in size over the years since it started in 2011. From only 15 motorcycles then, it had 150 yesterday.

Mr Nathaniel Tay, 30, who founded the WOL in 2011 as part of riding group Course Security Singapore’s activities, said: “There are not many charity rides in Singapore and I feel that there’s a need to help our country before helping others.”

The area’s Member of Parliament Fatimah Lateef, the event’s guest of honour, added: “This event is an excellent platform to bring people together, show their love of riding and also do good.”

IT programme manager Billy Ng, 53, joined WOL for the first time this year.

The member of motorcycle club Team 27 said: “It felt really good to help the elderly clean their homes… My team helped a Muslim couple just now and ensured that their home will be clean for their Hari Raya celebrations.”

Mr Ng stopped riding 30 years ago but decided to re-enter the scene as age was catching up and he still wanted to own his dream Harley Davidson motorcycle.

He intends to take his 12-year-old son and wife to help out for WOL next year.

Madam Ng Hiong Kew, 67 was all smiles and laughter after seeing that her one-room flat was spick and span.

She said in Mandarin: “After my knee operation, I can’t walk well and take a very long time to clean up so I am really grateful that they (volunteers) came over to help me out.”