Do not release animals into the wild this Vesak Day — that’s a reminder from the National Parks Board (NParks).

NParks said it is working with volunteers to carry out “Operation No Release” in the nature reserves and reservoirs this weekend.

They will keep a lookout for any case of animal release and will educate and advise members of the public on the harm of releasing animals into the wild.

NParks director of conservation Wong Tuan Wah said: “We would like to appeal to the public not to release animals into the wild as it means sending them to their deaths.

Meanwhile, Buddhist Fellowship president Angie Chew Monksfield said: “We should be compassionate and considerate to animals both in captivity as well as in the wild as releasing certain animals could threaten those in the wild.

“It would be more beneficial to reduce our meat intake all year round than simply releasing animals during Vesak as this could also encourage vendors to increase the supply of animals for this very purpose.”

To complement efforts of the operation, NParks is partnering volunteers and students from CHIJ Our Lady Queen of Peace to conduct an outreach ambassador session at the Bukit Timah Nature Reserve on 19 May, from 9am to noon.

The session aims to educate and advise the public against releasing animals into Singapore’s reserves and nature areas.

This mother’s day, buy the Valrhona Chocolate Banana cake baked by famous chefs from The Ritz- Carlton & Marriott and the proceeds go to Operation Smile at $28 only! 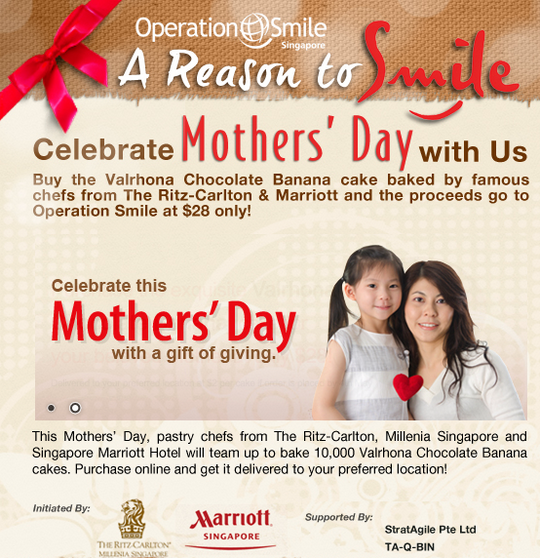 Last year, its volunteers clocked a total of 200 hours through ad-hoc projects.

NTUC FairPrice also plans to increase the number of volunteering activities from 12 in 2011 to 75 by 2016.

Mr Seah said: “We also hope that by doing this, we can encourage more, other corporates, to also play their part to create a bigger impact for the community.

“This we believe is our way – in being a big employer… we should lead, in terms of creating a bigger social impact and helping to build a better community.”

FairPrice will also work with YMCA and voluntary welfare organisations, such as Food from the Heart, Ren Ci Nursing Home and Society for the Physically Disabled.

She said: “There are many NTUC volunteers who come during Chinese New Year to toss ‘yusheng’ (raw fish salad) with us. It makes us happy as we sing and dance.”

Data from the National Volunteer and Philanthropy Centre, released last September, show that volunteerism fell from 23 per cent among 20 to 24 year olds to 16 per cent among those aged 25 to 29.

Research has also shown that volunteer activities organised by employers will attract more volunteers. They will also entice those who have stopped volunteering due to work commitments to pick it up again.

25-year-old human resource executive Chantal Ong used to volunteer when she was studying in university, but stopped when she started working.

She said: “I think it’s the time factor – because as a fresh grad, I will want to spend more time on my career, and then slowly adapting to the company and the work processes. So actually when FairPrice has this initiative, and I’m being nominated as a volunteer leader, I was quite happy to take it up.”

Even as an animal welfare group prepares to submit a formal proposal to the authorities for the banning of the shark’s fin trade here, a movement to get the dish off the dining table is catching on among some Members of Parliament and grassroots leaders.

Nee Soon GRC Member of Parliament (MP) K. Shanmugam, who looks after the Chong Pang ward, told TODAY: “I took the view that we should avoid shark’s fin on the menu for functions which Chong Pang organises. I spoke with my grassroots leaders and they were supportive of the move.”

Mr Shanmugam, who is also the Law and Foreign Minister, said the decision was made in June last year after an animal welfare forum held by Chong Pang Community Club in collaboration with the Animal Concerns Research and Education Society (ACRES).

He added that, personally, he had decided for some time not to consume the dish.

At a youth forum in 2010, Nee Soon GRC MP Lim Wee Kiak, along with other MPs present, was asked if he would refrain from serving the Chinese delicacy during constituency dinners.

Dr Lim, who takes care of the Canberra ward, replied that he did not think he would and, while he did not want any sharks to become extinct, he pointed out that not all shark populations were endangered.

Alluding to his earlier comments, he told this newspaper that his position remains unchanged. The recent decision is not a “ban” per se, he said.

“The step forward was not an official position … part of it was also not to be too ‘extravagant’. Nutrition-value wise, other things are more nutritious. Fish maw is better,” said Dr Lim, who added that the issue is sensitive and “not everybody” will agree with the decision.

Cashew ward is under the charge of Minister for the Environment and Water Resources Vivian Balakrishnan. Grassroots leader Linda Ng said a “conscious effort” has been made to replace shark’s fin with fish maw at the ward’s functions since late last year. Their reasons included budget considerations and residents’ preferences, as well as “the knowledge of how shark’s fin is created” as a dish, said Mdm Ng, who chairs a residents’ committee.