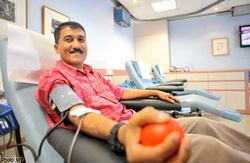 When the Greek tanker Spyros exploded at Jurong Shipyard in 1978, killing 76 people and injuring 69 others, Mr Suppaiyya Velaisamy stepped forward to help by donating blood for the first time.

Inspired by his elder brother, a regular blood donor at that time, Mr Velaisamy, then aged 20, overcame his initial fear of needles and donated blood at the Bloodbank@HSA in Outram Road.

“Maybe I was a little scared of the needle at first, but most of the nurses were very experienced, and it felt like only a small ant-bite,” he told my paper.

Since then, Mr Velaisamy, 54 and working in the Republic of Singapore Navy, donates blood once a month. Since 1978, he has donated blood a total of 157 times.

“I don’t actually keep track of the number of times I’ve donated.

As long as the blood goes to somebody, I am happy,” he said.

He is among 42 recipients of the “Champion of Champions” award, handed out by the Health Sciences Authority (HSA), for achieving a lifetime milestone of donating blood more than 150 times.

“I feel very thankful,” he said, adding that he is appreciative that he and other donors have been given recognition “because of all the time taken to donate”.

A typical blood- donation session takes half an hour, and up to an hour and a half for a process called Apheresis – the extraction of platelets and plasma from the blood. Mr Velaisamy has also participated in this process.

He will receive his medal at an appreciation ceremony and carnival organised by the HSA and the Singapore Red Cross on Saturday. The theme for the ceremony is “Every Donor is a Hero”.

When asked how he felt to be honoured as a hero, he said: “I’m just doing my part.”

The carnival, to be held at the Singapore Flyer, is open to donors and their families and organised in conjunction with World Blood Donor Day 2012, which is observed today.

In Singapore, an average of 350 units of blood from a total of 450 donors is required to be collected daily. According to an HSA spokesman, only 1.8 per cent of the entire population are donors.

“I encourage others to become donors because it is one donation that guarantees that you can save a life,” urged Mr Velaisamy.