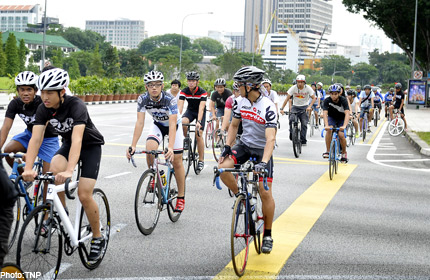 What they could not do for their child, they now hope to achieve for orphans and other children battling critical illnesses.

Nur’s parents made this pledge amid their grief on Saturday.

Her father, Mr Muhammad Ghazali, 27, a security supervisor, said that these were their preliminary plans and they would share more details soon.

Since The New Paper’s report two weeks ago on Nur’s condition, there has been an outpouring of sympathy for her.

Kind-hearted people came up with several fund-raising initiatives to help pay for a heart transplant overseas.

More than $400,000 was raised for Nur’s heart transplant in less than three weeks.

The efforts to collect donations for her transplant included an online appeal which led to more than $300,000 being collected, a cycling event and a 12-hour concert in Bishan Park.

There were more events being planned for Nur, including a charity football game at Bedok Stadium at 4pm today and a charity concert-cum-celebrity football match at Woodlands Stadium next Sunday.

Former Singapore international Rafi Ali said that the charity match today will go on despite her death.

It will now be held in memory of Nur.

As for the concert-cum-football match next Sunday, Mr Saharuddin Abdul Jalil, 47, a representative from the group Malay Youth Performing Art (MyPart), which is one of several organisations behind the event, said that there will be a meeting among the stakeholders on Sunday to discuss the matter.

Mr Muhammad Azrie Halimi, 26, an avid cyclist, told The New Paper on Sunday that he and six other cyclists organised a cycling event last Sunday in which 300 cyclists raised $3,570.

Is he disappointed that the money raised could not save Nur?

The multimedia executive said: “Nur was admitted to the hospital. They can use the money to pay the bills. It’s for a good cause.”

When told of the family’s plans to donate the money raised to others, Mr Azrie said: “They are good people who think of others and not themselves.”

Mr Olly Ismail, 36, an events coordinator, was one of the organisers for the One Heart Music Showcase 2012 in Bishan Park last Sunday.

Mr Olly said he hoped Nur’s family would use the money for her hospital bills and also to help them over this difficult period.

He said: “For them, even a million dollars would not bring back little Nur.”

If there is one parent who would understand what it is like to lose a child despite all the fund-raising initiatives, it would be Ms Cynthia Lim.

Ms Lim, 32, who works in the finance industry, is the mother of six-year-old Charmaine.

Charmaine lost her two-year-battle with advanced neuroblastoma, a cancer that occurs in infants and children, last October.

The New Paper wrote about how she, her brother Jase and their divorcee mother were desperately trying to raise money to go to New York for treatment.

Singaporeans raised the $500,000 required for the trip within three weeks – despite slim hopes of success.

Could the money have been used to help a greater number of stricken children?

She said: “I can understand the rationality about how my half-a-million could be used to feed many children in Africa.

“But those kids are not my kids. Even if it’s just one kid, she’s my kid. As a parent, I would give my all to save my kid.

“Charmaine was able to have that chance because there are actually a lot of kind souls in Singapore.”