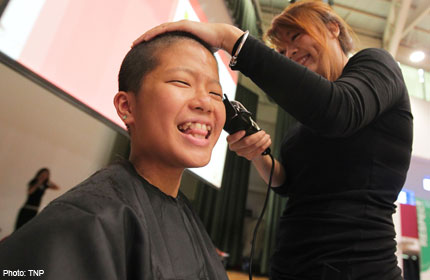 Ever since she was 10, Sarah Wee had wanted to shave her head.

She knew cancer patients would lose their hair during chemotherapy treatment and felt that shaving her head would make more people aware of the illness.

On Wednesday, the Raffles Girls’ School (RGS) student finally achieved her five-year dream, smiling away as the hairdresser’s shaver made inroads into her locks.

Initiated by Children’s Cancer Foundation (CCF) volunteers, Hair for Hope is an annual event where people shave their heads to raise funds for children with cancer.

Sarah, 15, was one of the 214 “shavees” at the Raffles Institution (RI) satellite event.

Besides shaving their heads as a symbolic gesture, they raised close to $30,000.

More than 20 shavees were girls.

Sarah, who had shoulder-length hair, told The New Paper before the event: “I’m excited. I’ve wanted to do this for a long time.”

She was in Primary 4 when she read an article about it in the newspapers and decided to find out more.

She said: “When I found out the reason behind it, I was fascinated and thought it was a meaningful cause.

“I want to do something to fight against cancer and rally people to do so, too.”

The cause is something near and dear to her as both of her maternal grandparents died from cancer.

She said: “It’s to show that life is not much different whether you have hair or whether you don’t.”

And she is thankful for the support of her parents.

Said her mother, Mrs L.L. Wee: “She wanted to shave her head a while back, but we weren’t sure if she was ready, so we told her to wait.”

When they heard about Hair for Hope, they had a chat with her to make sure she understood the implications of making a bald statement.

Mrs Wee said: “She was going to look different and she had to be able to handle stares and unkind remarks.”

As Sarah made her way onstage, cheers erupted from her 20 supporters who chanted her name.

She sat down and braced herself by making funny faces at the crowd. No tears were shed when the Jean Yip hairdresser began shaving her head.

Instead, she was all smiles as locks of hair slowly fell to the ground.

She plans to keep a few strands and give the rest to a charitable organisation.

“Probably one that makes wigs for children with cancer,” she said.

Sarah’s courage was met with admiration from her friends.

“It’s a hard thing to do, even more so if you’re a girl,” said her classmate Ng Shi Min, 15. Shi Min said: “She was so cheerful and excited during the whole process. I thought it was really brave of her.”

Mrs Wee is also proud of her daughter.

“The fact that she was laughing and talking throughout the entire thing really diffused the tension.

“I’m glad she enjoyed herself and it doesn’t change who she is. Without her hair, she is still the same beautiful girl that we love,” she said.