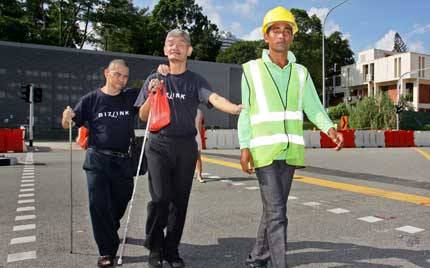 He seems like any other construction worker, with his fluorescent green vest and bright yellow helmet, standing at a busy worksite at Toa Payoh Rise.

But take a closer look and you’ll notice that Mr Abdul Alim’s vest is a little different, with the word “GUIDE” emblazoned across the back.

For the past two years, the 23-year-old construction worker has been helping members of the Singapore Association of the Visually Handicapped (SAVH) cross the road.

The road outside the association is cordoned by barricades as part of a project which began in March 2010 to widen Toa Payoh Rise to a dual two-lane road.

Heavy vehicles, like concrete mixers and excavators, are common in the area.

The Land Transport Authority (LTA) made arrangements with contractor, CHC Construction, to have guides stationed along the walkway which leads to a traffic light, to assist the visually impaired and the elderly across the road until the construction works are completed next month.

Said LTA: “We are mindful of the impact of our construction works and put in measures to meet the needs of stakeholders affected by our works, where possible.”

Mr Abdul said that when he first offered the SAVH members his help, some of them were hesitant.

“But I introduced myself and told them I was a guide… Now everyone knows me,” he said with a smile.

After two years on the job, he knows most of the members’ names, he added proudly.

He said he helps up to 30 members of the association every day.

When The New Paper visited the site last Monday, Mr Abdul was helping Mr Hung Kee Tong, 50, and Mr Lim Tang Kwee, 55, both SAVH members, to cross the road as their shift at the association ended in the evening.

Mr Abdul walked slowly across the road, turning back every once in a while to make sure that the two men were keeping up.

When the trio reached the other side of the road, Mr Abdul gave Mr Hung a pat on his back.

“Careful ah,” said Mr Abdul to them before making his way back to his post.

Mr Hung doesn’t know the name of the guide who helps him cross the road every evening, but he said the man is “kind and helpful”.

A spokesman for CHC Construction said the guides have to undergo an induction course conducted by SAVH.

They must be friendly and fluent in English, the spokesman added.

For most of the day, Mr Abdul waits outside the SAVH compund.

Sounds like an easy job, but he doesn’t consider himself luckier than his colleagues who toil at the construction site.

“It’s very difficult to pass the time,” admitted Mr Abdul, who came to Singapore from Bangladesh three years ago, after completing his A levels.

CHC Construction is all praise for their worker, saying that he is “hardworking, responsible and attentive”.

Said an SAVH spokesman: “We are delighted by the thoughtfulness of the LTA because having the guides ensures the safety of our visually handicapped.”