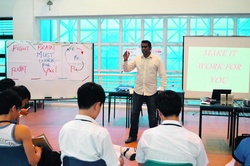 After spending eight years behind bars, Mr David King Thorairajan had barely two weeks to reintegrate into society before starting life as an undergraduate in 2008.

With the world having moved on since he last experienced life outside prison, Mr Thorairajan, now 30, recalled having to figure out how to use a stored value card for public transport and how to get from his MacPherson home to the Singapore Management University (SMU) campus in Bras Basah to settle administrative matters before the university term started. He ended up at Bedok Reservoir that day.

And things did not get any easier on the first day of school. Mr Thorairajan, who was among the batch of SMU graduates this year, said: “Everyone was asking one another ‘which school were you from’ … How I do explain where I was from? I can only say I was a private candidate.”

Awkward social conversations aside, Mr Thorairajan – who had dropped out of school in Secondary 3 before he went to jail for voluntarily causing hurt – said he found it hard to adjust to how wired-up society had become. He added: “Everyone was typing away … while listening to lectures. For me, I was so slow, typing each letter, using one finger at a time.”

On the third day of school, the then 26-year-old broke down.

“I was crying the whole day and have never cried like this before,” he recalled.

He called his brother, a friend and his counsellor. But it was only when he had time to reflect alone at home that he decided to give himself another shot at university – having come so far by acing the “N”, “O” and “A” levels while in jail as well as getting selected for university admission after the SMU professors interviewed him in prison.

Today, it is hard to tell that Mr Thorairajan was once struggling to come to terms with a society whose changes had passed him by, as he sought to pursue a ticket to a better life.

He took only three-and-a-half years to complete his degree in social sciences.

Mr Thorairajan, who tied the knot in May, credits his Christian faith for the turnaround in his life, as well as the remorse he felt towards his mother for letting her down.

After completing his studies, he applied to be a teacher with the Ministry of Education. However, he did not make it through the interview.

With the experience of working with youths during his undergraduate days, Mr Thorairajan started a social enterprise mentoring at-risk youths in November last year. According to him, more than five schools are engaging his services currently.

He has also embarked on starting another social enterprise – seeking mentors and investors – which aims to help ex-offenders become entrepreneurs.

He said: “Out of the many out there who fall, I am just one of the few who eventually got out of it. It is not always the case. A dream I have … is for all youths to stay away from gangs, especially those from dysfunctional families.”

This story was first published in TODAY