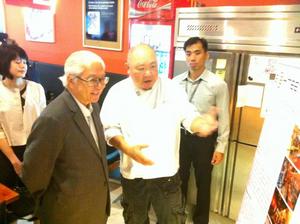 President Tony Tan Keng Yam has urged Singaporeans to play an active role in helping the less fortunate and disadvantaged.

He said the government will do its part in supporting those who help themselves, as well as fellow citizens.

He made this point during a visit to a social enterprise, Eighteen Chefs, which hires ex-offenders and delinquents.

Eighteen Chefs is a cafe that trains and employs ex-offenders to become chefs and service crew. Set up by ex-offender Mr Benny Se Teo, its mission is to give ex-offenders and delinquents a new lease of life by equipping them with culinary skills and a career in the food business.

Since its inception, Eighteen Chefs has created employment opportunities for more than 50 ex-offenders.

During the visit, the President learned about the operational considerations and constraints of social enterprises in the food and beverage industry and interacted with the beneficiaries employed at Eighteen Chefs.

Dr Tan said: “There is an old Chinese saying ‘if you give a person a fish, he eats for one day. But if you teach him to fish, then he can live for many days because he can earn his own living’. I think the social enterprise, in that sense, is good.”

He added that he was very encouraged by the work done by Eighteen Chefs and that social enterprises are good examples of how successful and able Singaporeans can help the less fortunate and disadvantaged in our society in a viable and sustainable way.

Mr Se Teo, who now owns three branches, overcame the odds to get to where he is today.

He said: “In 2009, we expanded too fast. From one shop, we had four shops. Right now, we have three, and we closed one shop. And it’s very painful to close an eatery and it costs a lot of money. ”

The social enterprise bounced back, prompting President Tan to declare it a “success story” for other enterprises in Singapore.

In Singapore, there are presently about 170 social enterprises.

This article is adapted from articles in Asiaone and CNA