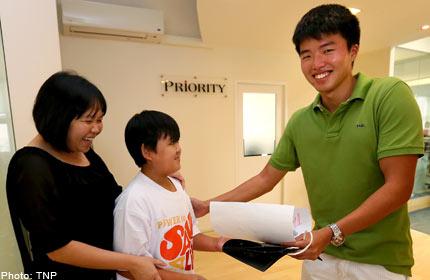 At 19, Mr Lim Shi Hong donated his bone marrow – not once, but twice – to save the life of a nine-year-old stranger.

This was in 2007 and amid protests from his grandmother, who was afraid for his life.

Though the two never met, Mr Lim was kept updated on Bryan’s progress by the people at the Bone Marrow Donor Programme (BMDP) until he left for his studies in Britain three years later.

On Wednesday, Mr Lim, now 23, finally got to meet the boy he saved at the BMDP office at Mohamed Sultan Road.

According to an anonymity clause, a bone marrow donor and recipient can meet only after two years.

There to meet Mr Lim were Bryan, his brother Brandon, 10, his mother and grandparents.

Initially, Bryan was shy, but his grateful mother broke the ice.

“If it wasn’t for this young man, my son would not have a chance in life. He not only came through once, but also the second time when he was approached. For that, I am forever grateful,” she told The New Paper.

Bryan’s immunodeficiency disorder was not diagnosed until he was three.

“His younger brother Brandon was diagnosed at birth. Since he had the same symptoms, Bryan was tested too,” Madam Chin, an early childhood educator, said.

Bryan underwent Intravenous Immunoglobulin Therapy and was often in and out of the hospital.

In 2007, Brandon received a stem-cell transplant from cord blood, making him the second recipient of cord blood from the Singapore Cord Blood Bank, less than two years after it opened its doors.

But Bryan did not find a match at the bank and had to turn to the bone marrow option.

It took BMDP a year to find a perfect match in Mr Lim. And in the same year as his brother’s transplant, Bryan had his at the National University Hospital.

But complications soon set in.

Said Madam Chin: “His doctors thought after the transplant he would be out of the woods but on the 40th day post-surgery, his immune system crashed and he suffered fungal infection.”

“None of the antibiotics given to him was effective. He suffered a stroke, became blind in his right eye and fell into a coma. The hospital told me I had to prepare for the worst, unless the donor was willing to donate his marrow again.”

Madam Chin admitted she went into a depression and “was not at all hopeful”.

“How many people would give once, let alone twice? But Shi Hong was godsend. He offered a sliver of light in my dark period when he said ‘yes’ for the second time,” she said, her eyes brimming with tears.

19 when he first saved a life

Mr Lim was serving his national service at the Officer Cadet School (OCS), when he was first told he was a match to save a boy with Hyper-IgM Syndrome.

“I was in Hwa Chong Junior College when BMDP came to give a talk. I was convinced it was a very good cause and gave my blood sample. Little did I know I would be called upon,” he said.

He said his parents were very supportive when he told them he had been called to be a donor.

“But my grandmother, being very ‘traditional’, was very worried and was trying to dissuade me. She was concerned that this operation would affect my own health,” he said.

When approached a second time and told of the urgency, Mr Lim did not hesitate, much to the chagrin of his grandmother.

“Since I was in OCS, I had to inform my supervisor, who gave me permission to go ahead,” he said.

After donating, Mr Lim went on with his life, and Bryan was discharged after spending about half a year in the hospital.

“Someone from BMDP kept me in the loop of the recipient’s medical progress. But I lost touch three years ago when I left for my studies,” he said.

He is currently doing a post-graduate course in mechanical engineering in Britain and is back in Singapore for the holidays.

President of BMDP Jane Prior said: “We are looking at young people like Shi Hong to step up as volunteer donors. They are in their prime and would be the best candidates to offer help to those who need transplants.”

To encourage them, BMDP is organising Match for Life, a high-profile drive to recruit at least 3,000 new donors.

Today, Bryan is back at Dazhong Primary, and playing football, something both he and his mother never thought he would be able to enjoy.

“The first day he stepped into his school after his medical ordeal, he said ‘I never thought I’d be able to come back here again’,” Madam Chin said.

To say thank you to his saviour, Bryan made a photo collage of his being in hospital and his travels after being given a second lease on life.

“It is my way of saying ‘Kor kor, thank you for giving my life back to me and allowing me to do stuff other boys do’,” he told TNP before presenting it together with a drawing to Mr Lim.

Hyper-IgM Syndrome is a immunodeficiency disorder present from birth. A child with this congenital disorder fails to produce certain specific types of antibodies.

It affects only boys, but girls are often carriers. The disorder shows up during the first year of life when the child develops recurrent infections of the respiratory tract and chronic diarrhoea that do not respond to standard antibiotic treatment.

The disorder causes frequent infections of the ears, eyes, sinuses, lungs, skin, respiratory tract and other areas of the body.

Children who are not diagnosed early, may show delays in growth and normal weight gain.

Bone marrow transplants are considered a cure for immunodeficiency disorders that are present from birth.

The best sources of bone marrow for transplants are the affected child’s siblings or one of the parents, as the closer the match, the lower the chances of rejection.

Stem cell transplants from cord blood have two advantages over bone marrow transplants – lower rate of rejection in recipients, and they can be stored ahead of time.

Bone marrow recipients, like Bryan Pang, owe their lives to the thousands of anonymous donors who register themselves with the Bone Marrow Donor Programme (BMDP), a group that matches bone marrow donors with patients.

Bone Marrow Donor Programme and what it does

Established in 1993, BMDP is a non-profit organisation responsible for building and managing Singapore’s only register of volunteer donors, who are willing to donate their bone marrow to save the lives of patients with leukaemia and other blood diseases.

The BMDP also provides a 365-day service to hospitals here to search the local register – and if necessary, partner registers around the world – for a match.

Every day, six Singaporeans are diagnosed with various life-threatening blood diseases, such as leukaemia and lymphoma.

Many will not survive without transplant using donor bone marrow or stem cells from cord blood. To date, there are 50,000 donors on the database and BMDP has facilitated over 420 transplants. To improve the odds of finding a match, BMDP aims to increase the register by 5,000 new donors each year.

Next month, BMDP is organising Match for Life, a high-profile drive to recruit at least 3,000 new donors.

Save a life A collaboration between the BMDP and the corporate sector, Match for Life aims to take advantage of the communications infrastructure within each organisation to reach out and educate staff on the role they can play in saving a life.

President of BMDP Jane Prior said: “Signing up as a bone marrow donor takes just a few moments, but the commitment to actually donate in the future if identified as a match, means that people must be fully-aware of the long-term implications.

“By sharing details about our work through company intranets and speaking to staff at lunch talks and other forums, we are confident that more people will step forward to commit to our life-saving mission.”

A swab of the cheek for DNA is needed to put a person in the database. The BMDP receives no Government funding, and it needs to raise $2 million for laboratory tests required to add each new donor to the database.