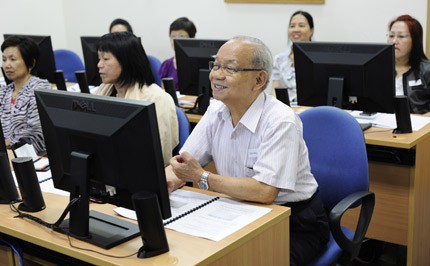 Wanted: 2,000 senior citizens as volunteers to help others like themselves through activities such as popiah preparation, assisting the disabled with horse-riding and, even, chatting with mental patients.

Mr Gan Kim Yong, Minister for Health and Minister-in-charge of Ageing Issues, said at the launch that he was “heartened” that senior volunteerism has been on the rise.

Said Mr Gan: “Even as we gear up to meet the anticipated care needs that come with a rapidly ageing society, we find that seniors themselves are assuming roles as neighbour-helpers to other seniors, as caregivers to seniors in their households, and as care workers within the community.”

During Senior Volunteer Week – which started yesterday and ends on Tuesday – seniors can sign up at RSVP as volunteers, for activities such as helping patients in hospitals and doing photography work. Seniors can also attend talks, including those on volunteerism and caring for mental patients.

RSVP, which has 1,000 volunteers aged 55 and above, also launched its Senior Volunteer Training Centre yesterday, to train the elderly in specific skills they can use to contribute to the community.

The centre will be fully operational by the year end and offers programmes, including computer lessons and a course on being a more effective volunteer.

As the centre’s Junction 8 premises were under renovation, courses were conducted elsewhere, with 300 people trained so far. RSVP hopes to train 400 more by the year end and a further 700 next year.

Mr Raymon Hwang, 86, a volunteer for 50 years, said he is now able to communicate with and better understand the people he helps, after taking courses at the training centre. “Even as an experienced volunteer, I learnt new things, like effective listening. A lot of people hear, but they don’t listen,” he said.

This article was first published in mypaper.