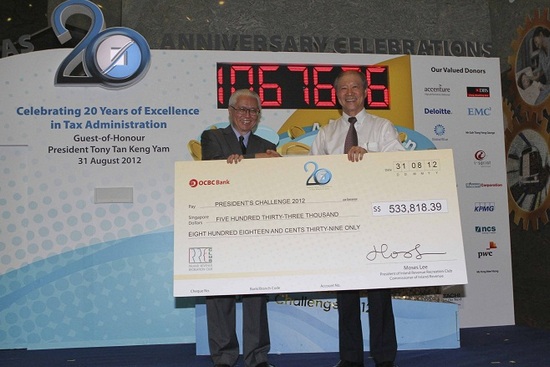 In a festive closure to the year’s celebratory activities and fund-raising efforts, President Tony Tan Keng Yam graced IRAS’ 20th Anniversary celebrations held this afternoon at Revenue House and received a cheque of $533,818.39 for the President’s Challenge 2012 from Mr Moses Lee (李金富), Commissioner of Inland Revenue.

The Inland Revenue Authority of Singapore (IRAS) celebrates its 20th Anniversary as a statutory board on 1 September 2012. To mark this occasion, IRAS has engaged members of the public, stakeholders and staff in a series of activities to reflect on and reminisce about how tax administration in Singapore has evolved over the past two decades. As part of the celebrations, IRAS staff have also raised a record half a million dollars for President’s Challenge 2012.

The Inland Revenue Recreation Club (IRRC; 国内税务局员工俱乐部), IRAS’ staff recreation club, launched ‘A Million Coins for the Nation’ fund-raising effort this year, a rallying call among staff to raise funds for President’s Challenge 2012. To meet this goal, staff rallied their colleagues, families and friends to support this worthy cause, dipping into their savings and organising various fundraising activities to contribute to charity.

To support staff’s fund-raising efforts, IRAS also released for the first and the last time, a selected number of decommissioned revenue stamps for sale, giving members of the public and stamp collectors the rare opportunity to own a piece of stamp duty history, while contributing towards President’s Challenge 2012.

During IRAS’ 20th Anniversary celebrations held this afternoon, President Tony Tan Keng Yam capped the fundraising efforts by pouring a box full of coins to fill the ‘A Million Coins for the Nation’ structure to the brim. Measuring 1.64 m by
0.41 m by 1.02 m, this imposing structure installed at the first floor of Revenue House had housed the coins that staff had painstakingly collected for President’s Challenge 2012. The structure also sets a new record for the “Largest Box of Coins” in the Singapore Book of Records.1

Through the various fund-raising activities held over the past eight months, the IRRC raised $533,818.39. This amount is more than double of that raised in 2011, and the highest-ever amount in IRAS’ 10 years of participation in the President’s Challenge.2 This record-breaking feat was made possible through the collaborative effort of staff, the IRAS Board, the Taxpayer Feedback Panel, as well as generous corporate partners.