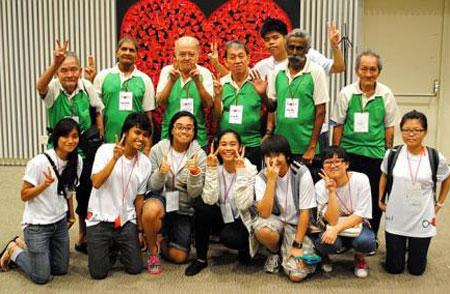 For Republic Polytechnic’s (RP’s) Project One Heart, the name says it all.

The project, supported by the Community Integration Fund, brought together local and international students from all five polytechnics this year to take part in community service.

Service Learning Club president and second-year RP student Kenneth Gwee, 19, said that the group had decided to expand an annual service event to help the elderly – not only to include all the polys, but also specifically invite international students to take part this year.

The event, which took place in May, involved more than 200 student volunteers who were put in local-international pairs to be matched with around 100 elderly residents of the Indus Moral Home, Sarah Senior Activity Centre and Crystal Light Methodist Home.

Over two weekends, the pairs worked on handicraft with the elderly, distributed vouchers, and went to the supermarket to help them shop for groceries.

“We had a common goal to make the elderly happy,” said Mr Gwee.

A number of the international students who took part in the project hailed from Malaysia, China and Myanmar.

One of the participants, Malaysian student Tan Sin Hui, 20, described the difficulties of adjusting to life in Singapore when she first moved here three years ago.

She said she initially struggled to make friends because she was not fluent in English. She enjoyed the opportunity given to her by Project One Heart to do both community service and meet others.

“Regardless of nationality, we’re very interested in helping the less fortunate,” she said.

This article was first published in The Straits Times.