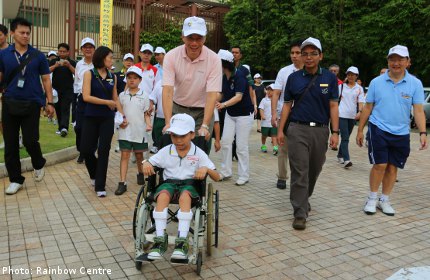 It has been a week of celebrations at the Rainbow Centre in Singapore.

Earlier this week, the centre hosted Prince William and his wife Catherine.

On Saturday, it celebrated 25 years of making a difference by helping the disabled.

After some warm-up exercises, Mr Lee went for a two-kilomentre walk with caregivers, supporters, children and staff of the Rainbow Centre.

The event was one of many to raise funds for the Early Intervention Programme for Infants and Young Children.

Writing on his facebook page, PM Lee said he enjoyed his morning walk.

He added that the children stole the show and he’s touched by their warmth and resilience.