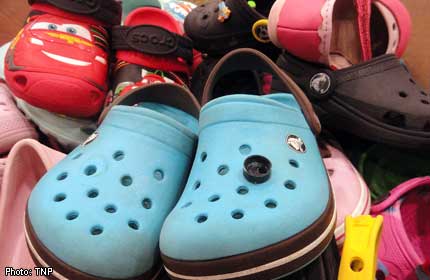 Like the people repairing them, these old Crocs sandals need a new lease of life.

Used and damaged, they would have been headed for the bin in normal circumstances.

But more than 3,000 pairs of Crocs were mended, cleaned and distributed to the needy.

In 2009, Crocs, the Singapore Prison Service and the Yellow Ribbon Project started a project to breathe new life into used Crocs sandals.

Since then, more than 3,000 pairs of these sandals have been mended by inmates from five of the 14 prison institutions here to be donated to several beneficiaries, both local and overseas.

Used Crocs still in wearable condition are dropped off at Crocs concept stores around Singapore and sent to the five prison institutions in Cluster B.

Inmates then pick out sandals in the best condition and wash them with sanitising soap before sorting them out into the women’s, men’s and kids’ categories.

Since the project’s launch, 30 inmates have been involved in it.

These would then be ready for collection by the seven partnering charity organisations.

Some of these sandals were also shipped to overseas beneficiaries in countries like India, Sri Lanka, Nepal, Cambodia and Thailand.

One of the partnering beneficiaries, Cornerstone Community Service Centre (CCSC), which provides services such as counselling and youth outreach, shipped their share of the sandals to Myanmar.

Mr Nigel Tham, a member of the Myanmar mission trip team with CCSC, said: “The children (we met in Myanmar) were especially excited as they admired their sandals and showed them off.

“But the most striking of all was an 87-year-old lady who, we were told, suffers from arthritis and despite the pain, walks bare-foot for almost 2km on dirt roads to church and back whenever there’s a gathering or service.

“We hope the sandals will help to alleviate the pain on her feet and her weathered and bent body.”

“Through this collaboration, the inmates are able to do their part for society. It is a true reflection of the Yellow Ribbon Project’s purpose of unlocking the second prison.”

An inmate, who wanted to be known only as John, volunteered for the project after being told the sandals would benefit those in Third World countries.

John, in his mid-30s, is jailed for a year for drug abuse.

He said: “I hope there’ll be more initiatives like this. It gives us inmates a chance to give love back to the community.”