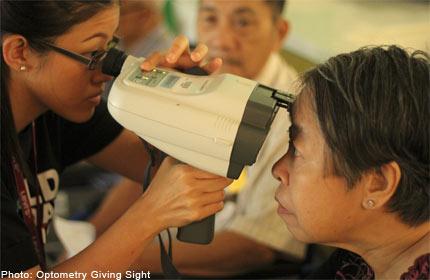 The senior citizens were tested for pathology and refraction, and those in need of eyesight correction were also prescribed spectacle lenses free of charge, courtesy of Carl Zeiss and Essilor.

In addition, specialist referrals were made for people with more serious eye and vision problems.

The screenings, which were held at Ngee Ann Polytechnic and West Coast Optometry Centre, were organised by Optometry Giving Sight – an international non-governmental organisation.

According to the organisation, uncorrected refractive error – which can be diagnosed by eye examinations and corrected with a pair of glasses – is the leading cause of preventable blindness and impaired vision throughout the world, affecting more than 600 million people.

Data from the World Health Organisation also estimates that more than 29,000 people in Singapore have uncorrected refractive error at distance. In addition, more than 636,000 are estimated to have uncorrected near vision, or presbyopia.

While most Singaporeans have access to regular eye check-ups and corrective measures to prevent blindness and impaired vision, underprivileged senior citizens may not have the financial means or understand the importance of regular checks to maintain their eye health, said Dr Stan Isaacs, Chairman of Optometry Giving Sight in Singapore.

“As a result, many are suffering from vision impairment and other eye health problems that can be prevented,” he said.