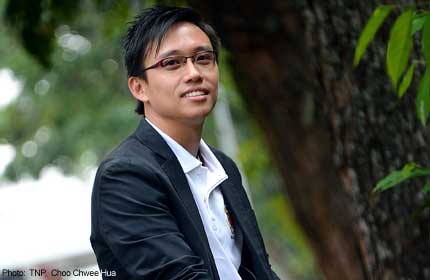 His Facebook post on an elderly couple who found each other after years apart moved thousands with its poignancy and simple truths.

In an online world where blatant lies (like the one about a patient at Singapore General Hospital having a deadly virus) and downright racism (former National Trades Union Congress assistant director Amy Cheong’s racist post about void deck weddings) have made waves, this heartfelt message serves to remind us that people who are good and kind exist in cyberspace.

Mr Lau Fengming Andy’s note on the Thye Hua Kwan Moral Society’s Facebook page about a 78-year-old man’s reunion with his frail wife after three years attracted close to 10,000 likes and was shared more than 1,600 times.

The note, which took him an hour to craft, included a heartwarming photo of Mr Lim Pui Chew tenderly stroking the head of his wife, Madam Lam Lai Sin, at a nursing home.

Mr Lim had not seen his wife for three years and he didn’t know which nursing home she had been sent to after she suffered a fall.

On Tuesday, with the help of people from the Thye Hua Kwan Moral Society, the couple were finally reunited.

Mr Lau, who has been a volunteer with the society for 10 months, had helped in the case.

He wrote in his note: “Throughout my life, I’ve met a considerable number of people… More often than not, we look at ourselves more than we look at others…

“Perhaps we should put aside our smartphones and take a serious look around us. Ask ourselves if the world is as beautiful as we always see it to be?

“For Mr Lim, seeing his wife again after separating for 3 years seem(s) to be his only hope. I am glad I can be part of the group that is fulfilling his wish.”

He ends it with: “I am not sure how this story is going to affect others, but this trip has definitely made me a better person.”

In an interview with The New Paper on Sunday from his office in Pandan Gardens, Mr Lau, 29, admits: “Honestly, I totally didn’t expect this kind of attention.

“I found out about it only several hours later after I received several requests from strangers to add them as friends.”

But it turns out that the note which he wrote and was later shared on Thye Hua Kwan Moral Society’s wall had gone viral.

He says: “It was only when I went back to the wall that the impact of the responses hit me.”

Mr Lau, who is married with a one-year-old son, says: “My main intention in sharing that sentimental moment was to remind ourselves not to take one another for granted.

“We often forget about the ones we love until it’s far too late.”

One particularly poignant moment for him was when he saw the pain and frustration in Mr Lim’s eyes as he stared at his bedridden wife.

“He asked loudly in Hokkien, ‘How come you can fall down until like that (sic)?'” says Mr Lau.

“He is deaf and cannot hear himself speak, but that sense of complete helplessness came through as he saw Madam Lam’s shrivelled and twisted hands.”

Mr Lau feels that he has done nothing at all in this incident. Instead he credits Mr Patrick Neo, 52, a manager at Thye Hua Kwan Moral Charities, who worked on Mr Lim’s case.

And social worker Karen Chan, who is from the society, helped to track down the nursing home which Madam Lam was placed in.

His note moved netizen Keri Mikey, who writes: “As a nurse, I have seen myself (sic) such stories and cases from my patients.

“But I am very touched to see that others too can realise the pain of others especially in the elderly like this.

“It is indeed a life changing experience to meet these people. They teach us things that no schools will teach; compassion, respect and of course, LOVE (sic).”

Another person wrote: “Thx for your sharing and I pray that all of us who ‘like’ would not just read it like a chicken soup story and forget about it the next moment but that we will change the way we live our lives and how we treat others.”

Mr Lau hopes that his Facebook note will now attract more people to step forward and offer their time to the needy elderly, many of whom need care and attention.

He says: “Let’s move on, away from just Mr Lim’s case, and look at others around us. I’m sure there’s so much more we can do.”

Mr Lau, who is also aware of the Amy Cheong saga, thinks that it’s important to use social networks in the right way.

He admits that he usually posts frivolous stuff on his own account but adds: “I think it’s fine to speak up on issues too.

“But before you click the post button, consider carefully and be politically correct and sensitive. What one line means to us can read differently to another.”

Just as it is with his note.

He said there was a particular comment, from someone whom he describes as “a grammar Ninja”, that hurt him.

Says the former Normal (Technical) student: “She wrote, ‘Good meaning to the story. But author’s gotta work on his English expression. It’s draggy and literally painful to read.’

“I was upset for about 30 minutes over the nitpicking, but eventually I replied, ‘Apologies if my English is not good. I don’t read when I was young (sic), and I am still learning. Thanks for your patience thou(gh).”