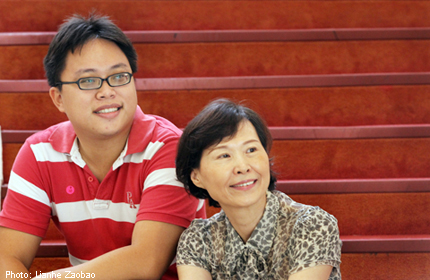 Men may shun volunteer work because they feel they do not have the soft skills, so the Chinese Development Assistance Council (CDAC) is appealing to their macho instincts instead.

Mr Baey Yam Keng, chairman of its Volunteers Engagement and Development Committee, noted that many people find volunteering requires a lot of soft skills and “some males may not feel comfortable with that”.

More than 60 per cent of the CDAC’s current pool of 3,000 volunteers are women.

Mr Baey, who is also an MP for Tampines GRC, said his committee will look into volunteer programmes that “will tap the physical attributes of men, and then they’ll feel that while they are helping the community, they can also be macho”.

He was speaking to the media at the biennial CDAC Volunteers’ Day on how it plans to expand its volunteer pool to support its growth of programmes.

The CDAC, which marks its 20th anniversary this year, provides tuition to poor students and training to low-income workers, among other activities.

Mr Chan Hee Teck, 26, who has volunteered with the CDAC since he was 12, said men do want to help out, noting that he has many male friends who do so. “Every little bit counts, you really don’t know where your influence will end,” said the programme development executive on the payoff for volunteering.

The council also plans to widen outreach efforts to tap volunteers. It will work with the Singapore Federation of Chinese Clan Associations to carry out activities for low-income senior citizens next year.

President Tony Tan Keng Yam, guest of honour at the event in Kallang Theatre on September 30, said organisations need to ensure that the needs of volunteers are looked after.

With a well-structured programme, they will feel a strong sense of responsibility and commitment, he added.

More than 120 volunteers were recognised for their contributions, including Madam Chang Shin Yi, 57, the only volunteer who has been with the CDAC since its beginnings in 1992.

“After I started volunteering, I realised that I could do a lot with my life. It ignited my passion for counselling and I went to pursue a master’s in it,” said Madam Chang, who is now doing her PhD in counselling.

She also met volunteers interested in education and started a tuition agency with them. “I may have started off as just a housewife, but now I have a career and my volunteer work.”