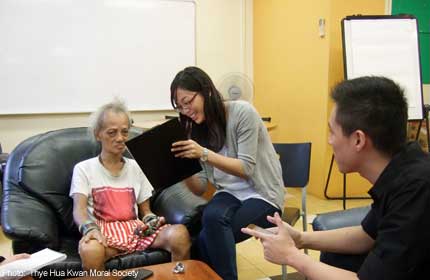 They were separated when she had a fall.

Mr Lim Pui Chew, 78, had not seen his wife, Madam Lam Lai Sin, who is believed to be in her 70s, since that incident three years ago.

Mr Lim, who is deaf and also partially blind, had no idea which nursing home his wife had been put in.

But on Tuesday, they were reunited.

Ms Karen Chan, 26, from Thye Hua Kwan Moral Society, managed to track down the nursing home that she was placed in.

Ms Chan, who is from Hong Kong, is a full-time social worker and was assigned to take care of Mr Lim only “about a month ago”.

She says the previous social worker caring for Mr Lim had indicated in her case report for her successor to help him track down his wife.

Mr Patrick Neo, 52, a manager at Thye Hua Kwan Moral Charities, where Mr Lim is a member, told The Straits Times: “From our understanding, his wife had a bad fall three years ago, and was put in a nursing home as he could not take care of her.

“He could not express himself and it was hard to communicate with him, so no one took him to see his wife.”

The Facebook post of Mr Lim’s touching reunion went viral, making him something of an online celebrity.

When The New Paper on Sunday met him on Friday, he was shy and reserved, often replying with short answers or just by shaking and nodding his head.

Some of the volunteers believe his uncommunicative nature could be because of the lonely lifestyle he had been leading for the past three years.

He revealed that he had no siblings and because of his communication problems, no friends either. Ms Chan claims that he spends most of his time “sleeping at home”.

However, he makes it a point to give this reporter one of the rings from his hands. Hands decorated by dozens of other rings and bangles.

According to Ms Chan, giving out rings has been MrLim’s way of showing his affection.

Mr Lim says: “This other lady recently moved to the neighbourhood and I gave her a few of my rings the other day.”

Ms Chan also says that Mr Lim is “a very considerate man” who doesn’t want to inconvenience anybody.

“After they were reunited, we asked Mr Lim how often he’d like to visit her at the nursing home.

“At first, he said that just once a month would be fine, but when we asked again, he said that he would like to see her once a week if it wasn’t too much trouble.”

So how does he feel now that he’s back together with his wife?

With a smile he says: “Very happy.”

Unfortunately, it seems that along with his hearing and eyesight, Mr Lim’s memory is also failing.

He is unable to remember details such as his former occupation, or even how long he’s been married.

But one thing he definitely hasn’t forgotten is his love for Madam Lam.

Mr Neo said: “It’s very heartwarming. Madam Lam is also hard of hearing so they can’t really communicate with each other.

“But when they meet, they’re contented with just spending time together, just looking into each other’s eyes and communicating through touch.”