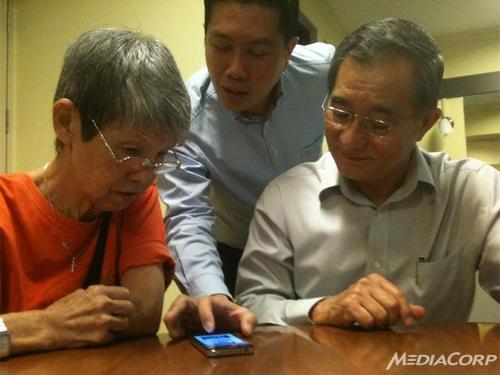 Project Silverline, a social project launched on Wednesday, will give out free and specially re-conditioned iPhones to the elderly to enhance their lives and safety.

SingTel will collect used iPhones and make them elderly-friendly for the seniors from two voluntary welfare organisations.

The telco will also give them free talk time and data plans for a year.

With the free iPhones, one of the activities senior citizens can enjoy includes watching videos. But the smartphones also have more practical functions.

SingTel has developed five application software exclusively for the elderly.

One of the apps is an emergency app, which seniors can use to call the police or an ambulance.

Another app allows the elderly to record their daily mood levels. This will help volunteers to keep track of the seniors’ moods during their weekly visits.

SingTel is working with charity groups Lions Befrienders and Willing Hearts, which will teach the elderly how to use the smartphone.

Mr Derrick Heng, SingTel’s director of segment marketing & communications and consumer marketing, said: “I think with technology, a lot of these seniors are intimidated. So, we’ve gone through focus groups to ensure the user experience and the applications are relevant to their lifestyles.

“There’s also a function which could detect via motion, that in case they fall, they would be connected to their caregivers immediately, via email.”

One of the seniors who is game enough to learn new technology is 76-year-old Madam Choo Kim Lain.

Speaking in Mandarin, Madam Choo said: I’m not afraid of technology because I like to learn new things and I can take photos when I’m out.”

She said: “My regular volunteer caregiver happened to call me at that time. He then helped me call for an ambulance as I didn’t know how to. With this phone now, I can do this myself, and don’t have to wait for help.”

SingTel said those who wish to donate their used iPhones can do so at its retail shops.

It hopes to collect at least 1,000 iPhones to kick start Project Silverline, which will be reviewed in March next year.

The project was first conceptualised at the end of 2010. SingTel held a series of focus groups to collect user feedback and data such as the needs of senior citizens.