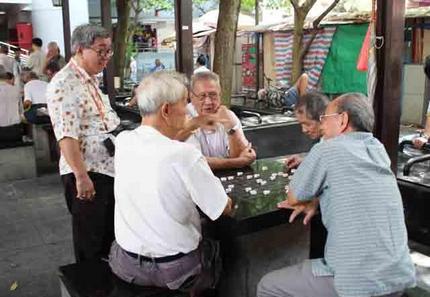 By the end of this year, elderly residents and their caregivers in Chong Pang will receive more support with a one-stop service centre.

The elderly population in Chong Pang currently stands at 24 per cent. With more expected to retire, Mr Shanmugam said this proportion will grow significantly.

Thus, to cater to the ageing population in Chong Pang, the Chong Pang Social Service Hub is being set up.

The hub will offer help for those suffering from dementia and depression, as well as their caregivers. It will also provide wellness programmes, befriender services for the elderly and free lunches for the needy.

In collaboration with Khoo Teck Puat Hospital, nursing staff will also be stationed at the hub.

Satyaprakash Tiwari, divisional director of Thye Hua Kwan Moral Charities, said such services had previously been offered in the north but was decentralised.

He said: “We are bringing all our services under one roof. So in terms of the residents, they don’t have to go to so many places. For us, there is better productivity and all the care is going to be coordinated under one centre.”

Mr Shanmugam is optimistic that the residents will be receptive to the social service hub being in their neighbourhood.

He said: “People here have a certain community spirit. But also, this is not like a major building that is coming up. And people can see the need for the service.

“We live in an urban society and if people have those concerns. You have to accept those concerns and it’s for us to say how do we all live together in a community with a society that’s ageing very rapidly.”

This initiative is operated by Thye Hua Kwan Moral Charities and plans to reach out to 5,000 elderly in a year.