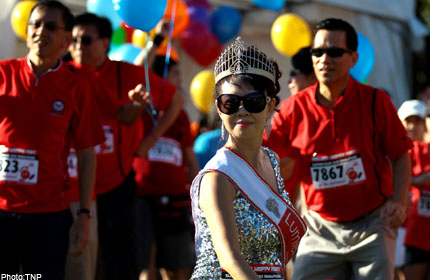 Going the distance for charity

Batman showed up in slippers – with good reason.

He was among the more than 2,500 people who took part in Project Happy Feet’s second annual Slipper Race at East Coast Park last Sunday morning.

Behind the mask was Mr Maswar Sahlan, a 72-year-old who has run marathons for more than 40 years.

Taking part in his first Slipper Race, he said: “I run in costume because I don’t want to show my face so people will wonder who I am.”

Though last Sunday’s turn-out was a significant increase from last year’s 1,800 participants, Mr Maswar hopes more people will support the race, which raises money for underprivileged school children in Singapore and Cambodia.

Batman might have had a running companion in Catwoman, as Madam Jenap Said, 53, known for running marathons in her Catwoman outfit, also took part in the Slipper Race for the first time.

But she left her costume at home and wore a bright pink shirt advertising Project Happy Feet instead.

She said: “Sometimes, I change things. This time, I’m wearing the shirt so I can raise awareness and let other people know about Project Happy Feet.”

Another first-timer, Ms Yang Lay, 49, the reigning Mrs Singapore Queen of Hope, appeared with her crown, sash – and slippers.

She said: “I came dressed so as to inspire others. I wish to bring hope to people and support the less privileged.”

Also walking the 4km route for the first time were MsRosanna Fung, 39, her daughter Chloe, 13, and their two dogs, Sky and Whisky.

“My daughter heard about this event in the morning news and we decided to sign up,” she said.

Having taken part in last year’s race, Dr Mohamad Maliki Osman, Mayor of the South East District, can consider himself a veteran.

He said: “I feel very relaxed compared to when there’s an event and I have to dress formally. But more important is the realisation that we can’t take the little things for granted.”

The Slipper Race was inspired by the many children in countries like Cambodia who walk more than 3km to school, either barefoot or in slippers.

The race aims to raise $250,000 for Sped Financial Assistance Scheme by Community Chest and the Compassion Fund in Singapore and This Life Cambodia, a not-for-profit, non-government community development organisation with a focus on education.