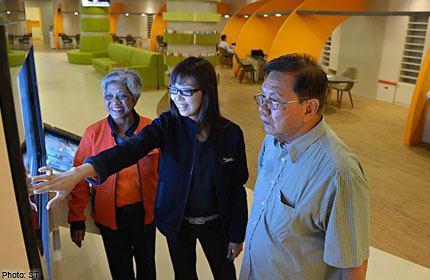 When his wife was diagnosed with dementia two years ago, 73-year-old John Ee approached both the Alzheimer’s Disease Association and the Asian Women’s Welfare Association (Awwa) for help.

The former army major also sought advice on day-care centres from a nurse at Tan Tock Seng Hospital. The help he received was useful, and today Mr Ee and his wife, whose dementia is still in its early stages, have settled into a comfortable routine of her attending day care at the New Horizon Centre at Jurong Point twice a week.

That process of getting help and information will be easier for others with the establishment of the Centre for Enabled Living @ City Square Mall, a one-stop service hub.

“It’s a very good idea,” said Mr Ee. “So the caregivers need not crack their heads trying to think, ‘Where should I look for this? Who should I talk to?'”

The centre can house several voluntary welfare organisations (VWOs) and also a retail area selling wheelchairs and other equipment for the disabled.

As a referral agency for people seeking services to help the elderly, the disabled and caregivers from the appropriate VWOs, the centre currently dispenses referrals through a hotline or references from hospitals, clinics or other organisations.

It serves about 3,000 people each month.

The roughly 8,600 sq ft space has room for up to eight service providers, consultation rooms, a training room and a showroom for items such as wheelchairs, grab bars and emergency alert systems.

“We want the public to have the widest range of choice possible at one stop,” said Mr Quake.

Centre staff will help clients fill out applications for grants or schemes.

Four VWOs – the Awwa, NTUC Eldercare, St Luke’s Eldercare and Thye Hua Kwan Moral Charities – have signed on to have permanent stations at the hub.

Centre chairman Chua Chin Kiat described the service providers as “an alliance of the willing” and said: “It’s good to have the major players under one roof.”

THK’s divisional director of elderly and disability services, Mr Satyaprakash Tiwari, explained that there was a “stigma” sometimes associated with going to its centres.

This is because some people feel embarrassed about walking into a centre which mainly serves the poor, the elderly or the disabled. But as St Luke’s Eldercare manager Veronica Goh said of a centre in a mall: “You can bring the whole family.”

The Awwa added that the hub would allow it to check how caregivers – who tend to neglect themselves while caring for others – were doing, and conduct caregiver training workshops.

The City Square Mall centre will be open seven days a week, from 10am to 10pm. Its soft launch is on Friday and doors will officially open on Nov 18.