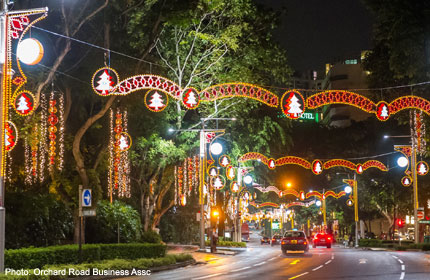 Over $500,000 was raised for Community Chest this year, the highest amount raised through the Christmas Light-Up Ceremony for the past decade.

Besides organisations chipping in to help beneficiaries of Community Chest, more individuals are also donating during the festive season.

One such individual is 14-year-old Matthew Supramaniam, the soprano used his musical talent to help those in need.

His first album titled “Youthful MUSING” with the Orchestra of the Music Makers was used to raise funds for children and elderly programmes supported by Community Chest for the festive season.

Standard Chartered Bank, Keppel Corporation Limited and Singapore Institute of Management have strongly supported his fund-raising initiative with a $50,000 donation each, with RusSing Holdings Pte Ltd pledging another $10,000.

This year’s Christmas Light-Up Ceremony on Nov 17, marks the 25th year of the partnership between Singapore Tourism Board and Community Chest.

To mark their 22nd consecutive year of support for Community Chest, Hitachi has increased its donation this year to $220,000, bringing its total donation over the past two decades to $3.8 million.

The Hitachi Group of Companies has been the main sponsor for the event.

The public can also participate in this year’s Light-Up through the lighting of 5,000 battery-operated candles distributed by Celebrate Christmas in Singapore, the organiser of carolling performances and activities along Orchard Road.

The Orchard Road Business Association pledged a $1 donation to Community Chest for every candle distributed at the ceremony.

There are also donation boxes placed at the two gift shops along Orchard Road selling exclusive “Christmas on A Great Street” items, as well as several retail outlets, banks and post offices in the shopping malls along Orchard Road.