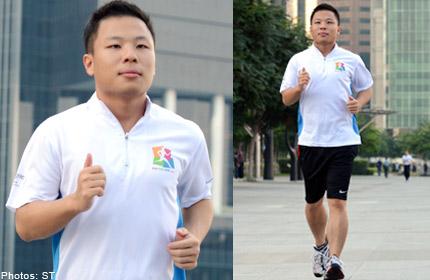 June 2009 started out like any other school holiday for Mr Raymond Tan.

Then 23 years old, he had just finished his third year in theatre studies at the National University of Singapore (NUS) and was lazing about at home and hanging out with friends.

He had one more year to go before graduating. He had no idea what he wanted to do after that but he was not overly worried. Life stretched out in front of him and things would just fall on his lap, he thought.

He was, however, feeling a little down because his 80-year-old grandmother, who had raised him, died at the end of May that year. She was diagnosed with stomach cancer about six months earlier. He comforted himself with the thought that she had led a long and relatively happy life.

But it turned out that his grandmother’s death was not the only bad news to hit him that school holiday. Something else happened which changed his world forever.

On the third day of his grandmother’s wake, he woke up with a throbbing pain in his chest.

When it would not go away after he took painkillers, he went to see the family doctor, who found nothing but advised him to go to the hospital’s accident and emergency department.

He said: “I felt a bit worried. I thought I was on the verge of a heart attack. My father has a history of heart disease while my grandfather died many years ago from a heart attack.”

But at the hospital, he was not prepared for what he saw on the X-ray of his chest. He said: “There was a black mass about the size of my fist near my heart.”

The doctor told him it was likely to be cancer.

The next three days, as he waited for the result of the biopsy, were the closest he felt to death because he did not know how serious his condition was.

When the results came back, he was somewhat relieved.

The doctor told him he had an aggressive form of lymphoma cancer called mediastinal large B-cell lymphoma, which was growing on the lymph nodes in his chest. The rare cancer tends to occur in the young.

It was at a relatively early stage as the cancer had not spread beyond the lymph nodes.

Over the next six months, he went through six cycles of aggressive chemotherapy, once every two weeks, followed by 20 rounds of daily radiotherapy.

When his hair came out in clumps after the first chemotherapy cycle, he shaved it off. His worst experience came after the third cycle.

Mr Tan, who describes himself as a fairly optimistic person, said the nausea and vomiting was so bad he sank into depression.

He said: “I was vomiting every few hours. I couldn’t hold down any food except for a piece of bread or biscuit.” Negative thoughts abounded.

He said: “I thought about my peers going on with school and wondered why this had to happen to me.”

As his illness had occurred during an outbreak of influenza, his mother, a 62-year-old administrative clerk, forbade him from having visitors to prevent him from catching the flu from them.

Mr Tan resented the isolation and having to depend on everyone else. He had to be accompanied each time he went for a chemotherapy session. One of the chemotherapy drugs made his head feel prickly, almost as if he had eaten too much wasabi.

His mother took unpaid leave for his first two weeks of treatment and then for each of his chemotherapy sessions.

She lost almost as much weight as he did as a result of exhaustion and worry. After she went back to work, his aunt came by every day to cook lunch and dinner for him.

Touched by the concern of those around him, he slowly emerged from his depression.

His twin brother, who was then studying economics at NUS, would tell him jokes and show him funny videos to make him laugh. His father, a 69-year-old operations manager, and his sister, a 32-year-old senior executive, would often ask about his health.

Whenever possible, they also took turns to drive him to the hospital for his check-ups.

Slowly, he started to feel stronger and was able to go for radiotherapy on his own.

When it all ended, his doctor said he had responded well. Six months after his diagnosis, he was able to go back to school for his final year of studies and graduated in December 2010.

He now works as a relief teacher in a secondary school and writes movie reviews for magazines as a sideline.

But he wants to do more. He is now pursuing a master’s degree in counselling, something which he had considered but did not pursue until now.

His goal is to be a counsellor who works with young people or other cancer survivors.

He said: “Having cancer makes you very focused on what you want in life. You realise that your time here is limited. There is a sense of urgency and you don’t muck around anymore, waiting for things to fall on your lap.”

His diet and lifestyle have also undergone a change. He pays attention to what he eats.

He said: “I eat more greens and I think twice about eating fast food, ice cream or fried hawker food such as char kway teow.”

Regular exercise is now part of his life, when it did not use to be. He goes to the gym twice a week for about an hour each time during which he jogs on the treadmill and does weight-lifting.

He said: “To prevent a relapse, I have to live healthily and responsibly. I cannot afford to take chances.”

Disease which mainly affects the young

Mediastinal large B-cell lymphoma is a rare form of lymphoma cancer, accounting for about 2 to 3 per cent of all lymphomas, according to the National Cancer Centre Singapore (NCCS).

For unknown reasons, it tends to occur in young people aged 25 to 40.

It leads to swelling of the thymus gland and lymph nodes in the mediastinum.

This is the part of the body inside the chest, between the lungs and behind the breast bone.

Symptoms are breathlessness and discomfort in the chest.

It is a high-grade lymphoma, which means it grows rapidly and needs to be treated immediately.

The good news is it responds well to treatment, which is usually a few chemotherapy drugs combined with a monoclonal antibody, a class of agents that target specific proteins on the surface of cancer cells and stimulates the body’s immune system to destroy these cells.

The NCCS found that after treatment, more than 80 per cent of its patients remained in remission after five years.

Lymphoma cancer is a cancer of the lymphatic system, which is part of the body’s immune system that helps fight infection. The lyphmatic system includes the thymus gland and the lymph nodes.

Lymphoma cancer, of which non-Hodgkin’s lymphoma is the most common, happens when lymphocytes (a type of white blood cell found in the lymphatic system) grow in an uncontrolled way.

There are two main types of lymphocytes – B-cells and T-cells.

Diffuse large B-cell lymphoma is the most common type of aggressive non-Hodgkin’s lymphoma.

On Nov 18, the 26-year-old will be taking part in Run For Hope, a fund-raising event for cancer patients.

While cancer is not a good thing in itself, he said it has taught him invaluable lessons. He said: “I appreciate my family more and I am more empathetic towards people in general.”

Join a 3.5km or 10km run to raise funds for NCC Research Fund, which is managed by National Cancer Centre Singapore.