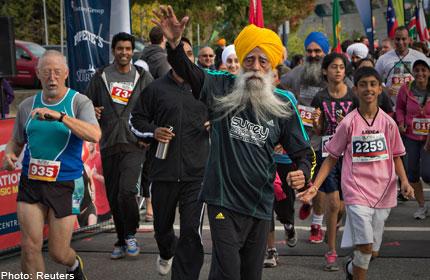 Fauja Singh, believed to be the world’s oldest marathoner at age 101 years old, will be participating in the Standard Chartered Marathon Singapore this year.

The British centenarian marathoner will be opting for the 10km race this round. Running with him is his son, Sukhjinder Singh, 53, in the same category, while four others from their running group, Sikhs In The City (SITC), will be participating in the full marathon in Singapore.

Born in India, Fauja moved to London in 1992 and is currently based in Essex, Ilford. An amateur runner in the Punjab before giving up the sport in 1947, he picked up running again after the demise of his wife and he relocated to London to live with his youngest son. Fauja has since participated in nine marathons and holds the world record for the men’s over-90 category after running the Toronto marathon in five hours and 40 minutes in 2003.

One of his last races before he retires, Fauja and his team will be running to raise awareness of the SportCares Foundation, a Vision 2030 initiative that aims to help activate sport as a force for social good — for underprivileged children, youth-at-risk, needy seniors, people with physical and/or intellectual disabilities and the disadvantaged in our community.

Donors who would like to contribute to Fauja’s cause may do so here.