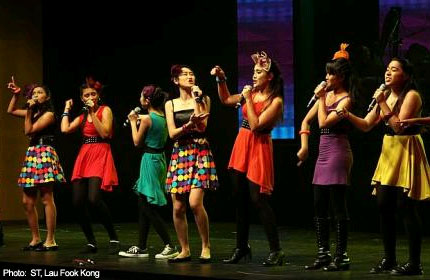 The audience held foam lightsticks of about an arm’s length, while the young talents performed against LED screens showing visual projections.

The young ones wowed the crowd with a high-voltage performance at the Electric Edition-themed ChildAid concert organised by The Straits Times and The Business Times on Friday night.

In its eighth year, the annual charity event raised a record sum of over $2 million – higher than last year’s $1.88 million.

Proceeds will go to The Straits Times School Pocket Money Fund, which helps needy schoolchildren with school-related expenses, and The Business Times Budding Artists Fund, which provides funding to nurture the artistic talents of underprivileged children.

For the first time, the sold-out concert was held at the Marina Bay Sands (MBS) Grand Theatre.

MBS is ChildAid’s official venue partner, while Citi and HSBC banks are its main sponsors.

The opening act, entitled Magic Bows, featured 70 members of the Orchestra of the Music Makers and about 40 performers, including two playing an electric violin and electric cello.

While the act featured mainly string instruments, the tempo was upbeat, in line with the concert theme.

Helmed by Mr Ismail and the ChildAid show director, Mr Jeremiah Choy of Orangedot Productions, the show featured 210 young talents performing in 16 segments. Performers included youths with fan followings on YouTube, such as 15-year-old rapper Toh Yi Fan, who has more than 5,000 fans, and dance groups such as Saltare Beats, a beneficiary of The Business Times Budding Artists Fund.

Violinist Cylvin Sim was thrilled to perform at the venue.

The 10-year-old from Nanyang Primary, who previously watched the musical Wicked at Marina Bay Sands said: “Whenever I watch plays here, I wonder when I can go up to perform as well.”

The concert continued on Saturday night, when Acting Minister for Culture, Community and Youth Lawrence Wong was the guest of honour.