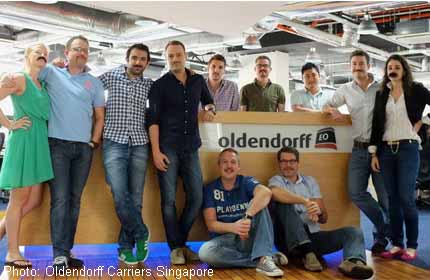 When Mr Paul Druce, 40, heard that Movember was coming to Singapore this year, he could not help but get every one of his male staff members involved.

The chartering director of Oldendorff Carriers Singapore sent an office-wide e-mail, telling all his male colleagues to take part in Movember, an international event held every year to raise awareness about men’s health issues, by having men grow out their moustaches.

Of course, it was all done with a dose of humour, said Mr Druce, a Briton.

Still, many of his colleagues from the German shipping company decided to sign up along with him, he said.

The 22-strong team from Oldendorff Carriers Singapore raised nearly $73,000 to become this year’s top team for Movember Singapore, with almost 10 per cent of the total raised here.

Since Movember began in Australia in 2003, every year, from Nov 1 to Nov 30, men across the globe have joined the event to raise money for various health issues concerning them, especially for prostate cancer.

Although Singaporeans have previously raised money for Movember, this year is the first time Movember has been officially organised here, said a spokesman for the Movember foundation.

Participants signed up online at the official Movember Singapore site. Members were then ranked on how much donations they brought in. All local leaderboards were frozen on Monday, said the spokesman.

While Oldendorff Carriers Singapore topped the team boards, Mr Robert Newcombe, from another group, was the top individual, with $13,642 raised. He could not be contacted by press time.

All funds raised in Singapore will be donated to the Singapore Cancer Society, as well as a local company researching prostate cancer, said the spokesman.

Mr Druce had first heard of Movember years ago, back in Europe, and he jumped at the chance to have some fun with it here.

“Nowadays, it’s not fashionable to have a moustache. That’s why this is such good fun,” said Mr Druce.

The team started by getting a clean shave. For the rest of November, besides keeping their moustache, they called up their international buyers and brokers, asking them to donate for the charity.

The team raised about $36,000 by themselves and Oldendorff Carriers Singapore then matched the amount to double the tally, he said.

For most in the team, this was the first time they grew a moustache.

The team shaved off their moustaches after Nov 30. The top Singaporean fund-raiser was Mr Matthew Kang, 52, who raised $10, 388.

Said Mr Kang, a senior director of financial services: “I’m normally clean-shaven, so when my friends saw me with a moustache, they started asking questions. That’s how I spread awareness about Movember and helped bring in donations.”