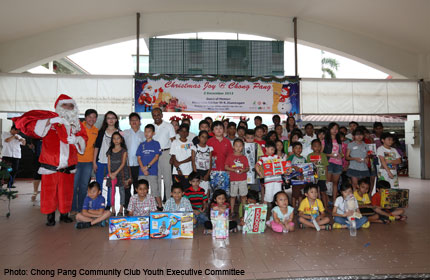 This Christmas season, 12-year-old Loh Joo Hoe wished for a Monopoly set. Thanks to a Chong Pang family event, he received one yesterday.

Joo Hoe and his younger sister, 10, and brother, six, were among over 50 needy children who had their Christmas wishes granted early at Christmas Joy@Chong Pang, an event organised by the Chong Pang Community Club youth executive committee for the second straight year.

Each child received a Christmas gift, presented to them by Mr K. Shanmugam – Minister for Foreign Affairs and Law, and who is also the grassroots adviser to Chong Pang – as well as five young donors aged six to 12, who had contributed by giving cash.

Volunteers of the project had invited the needy children, who were nominated by schools and voluntary welfare organisations and selected from the constituency’s welfare database, to each make a wish for a Christmas gift.

The invited children were aged between six and 16 years old.

Upon learning what each child desired, the volunteers hunted for the gifts – which cost $70 and below – purchased them, and wrapped them up to present to the kids.

Joo Hoe’s mother, Madam Goh Lay Wah, 40, was happy to see her kids buoyed by the festive spirit. She said in Mandarin: “The gifts they received have fulfilled their dreams (this Christmas).”

The family lives in a four-room flat in Sembawang.

Said Mr Shanmugam: “In this joyous Christmas season, we need to remember those who are less privileged and spread love and kindness to every part of the community.”