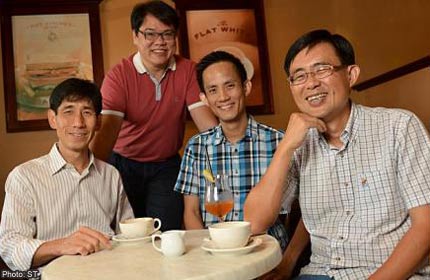 It is interactive charity at its best.

Instead of merely signing off cheques for charities, a group of entrepreneurs and retired executives implemented this year a creative way to enhance charity dollars by encouraging people to carry out their own fund-raising ideas.

The group, called Fundonate, offers the chance for any fund-raiser to receive an additional donation.

Any group or individual who raises more than $200 for a cause will get an additional $200 for the charity from Fundonate. Those who raise more than $1,000 will in turn get a matching donation of $1,000.

The four Fundonate founders have already paid about $40,000 from their own pockets this year to top up fund-raising efforts for a variety of charities and causes.

By using this method, the group hopes to convert armchair donors into active fund-raisers.

For example, when a Singaporean student in Britain raised $1,579 for the Autism Resource Centre by cycling with his friends from Cambridge to London in March this year, Fundonate added $1,000 to the cause.

Mr Joel Chin, one of the founders of Fundonate, said: “The aim of this project is to use the little that we have for a multiplier effect to get more people involved and to raise more funds.

“The $200 and $1,000 top-ups are large enough to motivate people to raise a minimum sum, yet small enough for us to support as many groups as we can in their fund-raising acts,” added the 39-year-old entrepreneur in mobile technology.

He first hit upon the idea of partnering online fund-raising platform give.sg for this initiative after two successful experiments with the portal.

In 2010, he urged his friends and family to donate to the portal instead of buying him birthday and Christmas presents that he might not really need. They raised close to $5,000 within a few days.

Since Fundonate started, it has partnered nine different groups of people to raise about $70,000 for charities such as the Rainbow Centre and Home Nursing Foundation.

The group has disbursed nearly $15,000 through its top-up scheme and donated more than $20,000 to various fund-raising projects. These range from charity dinners to musicals to football matches between old boys from Raffles Institution and current students at St Joseph’s Institution.

Another founder of Fundonate, Mr Leslie Wou, 41, who heads an online and mobile game development company, said: “As the name ‘Fundonate’ suggests, doing charity can be fun when we pair fund-raising up with doing activities that we already enjoy, or in tandem with meeting our personal goals.”

The group is in talks with secondary schools and polytechnics to get students to propose their own fund-raising projects by pledging its support through top-ups.

For more information, write to info@fundonate.org