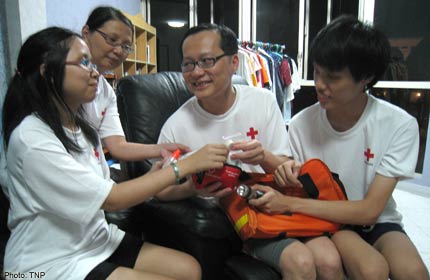 At three months old, she was already attending Red Cross events, such as courses and quizzes for school students.

Pushed in a baby stroller, Miss Sharon Lau, 20, was often taken along by her parents to these activities as they were Red Cross members.

Exposed to lifesaving skills from such a young age, it was little wonder that she would eventually become a member as well.

On Friday night, together with her family and 450 other volunteers, they attended a dinner to mark the 60th anniversary of Singapore Red Cross Youth (RCY).

Ms Sim Ann, Senior Parliamentary Secretary for Communications and Information, as well as Education, was the guest of honour at the dinner held at Ban Heng Pavilion restaurant at HarbourFront Centre.

There are currently more than 5,000 RCY members, made up of primary, secondary and post-secondary school students as well as non-student volunteers.

The New Paper had reported in 2002 that Mr Lau met his wife, Madam Ong Lay Khim, now 46, while serving as a volunteer at the Red Cross headquarters in 1980.

The couple have two kids, Sharon and Stanley, 19, and took them along to attend Red Cross events where Mr Lau gave speeches and awarded prizes at secondary school competitions and foot drills.

Now a vice-principal at Yumin Primary School, Mr Lau said: “These events are opportunities for family outings for us.”

He added that by being present, his family was able to better understand and appreciate his involvement in the Red Cross, which took up most of his weekends.

Miss Lau and her brother’s early exposure to Red Cross events helped mould their interest in serving others, and they later joined the first-aid movement in Primary 3 as part of the co-curricular activity in Peiying Primary School.

Miss Lau, an undergraduate at James Cook University, said: “I used to admire the seniors who could do perfect foot drills and were so involved in Red Cross that I looked forward to wearing the uniform as well.”

Currently working part-time as a relief teacher at a childcare centre in Khatib, she said she loves to share her experiences in the Red Cross with her students.

She said she has managed to inspire six students to join the body in their primary schools.

Miss Lau fondly recalls her time in the movement as a squad leader, joining first-aid inter-school competitions and being part of the logistics team.

Her parents told TNP they believe their children’s involvement in Red Cross has helped to instil in them the right values and principles.

Mr Lau said: “By their sheer observation and involvement, they have learnt the universal values of empathy and compassion.

“They don’t learn all these from mere nagging from us.”

The family is present at most of the society’s events, from visiting old folks’ homes to attending their anniversary dinners and first-aider bike patrolling duties at EastCoast Park.

Said Madam Ong, an allied educator at Admiralty Secondary School: “Interacting with the elderly has taught them to be respectful. These values are important for young people.”

Mr Lau said that being at events like Red Cross bike patrolling helped to teach his children to be more aware of others and the environment.

“You learn to be less self-centred and more sensitive. It’s about the simple things, such as greeting others with a ‘good morning’.”

For his message to other Red Cross volunteers, Mr Lau said: “As a volunteer, you can do more. Start by influencing others to come forward and volunteer in whatever way they can.”