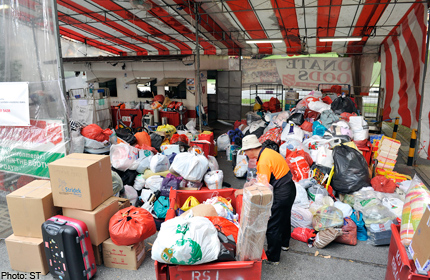 Chinese New Year is a time of abundance and that extends also to the Salvation Army, which gets a bumper crop of used goods to be resold in its Family Thrift Stores.

The 30 tonnes of donated items it received last month, mainly of clothes, was three times what the charity usually gets in a month.

True, most things are discards from the yearly spring cleaning of homes, but that is all right, said Mr James Tian, general manager of the Salvation Army’s Red Shield Industries, which manages the thrift stores.

Almost 90 per cent of what is donated are picked and cleaned to be sold at the five Family Thrift Stores, given to needy families here or overseas, or recycled. The rest are thrown away.

Donations are accepted at six collection booths around the country.

He had activated six trucks, and contracted an additional truck for this peak period, but even so, 10 per cent of the requests had to be turned down.

At collection booths, more staff have been deployed, and the more frequently used ones have tents set up to shelter goods from the weather.

One of these is at the Salvation Army Territorial Headquarters in Bishan Street 22, where a stream of about 50 donors arrived with bags and boxes within an hour on a weekday afternoon.

Professional footballer Shahril Jantan, 32, showed up with old jerseys, books and cushions. Last Thursday was the third trip to the Bishan collection centre made by the goalkeeper from Home United football club. In all, he donated 12 boxes of goods.

Gesturing to his one-year-old daughter, who was in his car, he said he hoped she would grow up to be a generous person and willing to help those in need.

Another popular collection point is at 309 Upper Serangoon Road, where events emcee Sharlyn Lim said she donated goods, up to three times a year.

“When you buy clothes online and can’t try them on, sometimes you find they don’t fit, she said. “But since they’re new, somebody else can make use of them.”

The Upper Serangoon collection booth, however, may be moved next year, as the land on which the 80,000 sq ft building stands has been earmarked for redevelopment.

The lease for the site of the former Youngberg Memorial Adventist Hospital ends next January but the Ministry of Social and Family Development is helping to find them another location.

Mr Tian, however, hopes a philanthropist will step forward to donate its new home.

He said: “We can name the centre after him.”