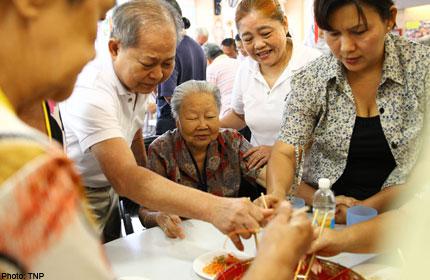 He was hospitalised, yet he asked his wife not to visit him.

Instead, he insisted she volunteer in his place to cheer up lonely and elderly people at a senior activity centre.

Mr Lee Chaw Kheng, 67, a kidney patient, was hospitalised twice in December for an infection of a graft on his arm that is used for dialysis three times a week.

Because the graft had become blocked, a permanent catheter had to be fixed to his chest area. He has since been discharged from the hospital.

Despite the constant itching that he experiences and the risk of infection, Mr Lee and his wife, Madam Beh Ai Leen, 66, have been volunteering with the National Kidney Foundation (NKF).

NKF launched a programme called Patient Outreach Programme last October to help patients look beyond their own circumstances and focus on lonely, single senior citizens who need care and concern.

The volunteers and the senior citizens sang Chinese New Year songs, accompanied by the enthusiastic rattle of water bottles decorated with shiny frills.

It was a sight to behold when Malay elderly folks also joined in the festive celebration with gusto.

The seniors, aged between 60 and 90, were also guided through the steps of tossing yusheng – salad with raw fish – with the help of the volunteers.

They were also each presented with a Cai Shen Ye (God of Fortune in Mandarin) figurine, mandarin oranges and lunch sponsored by one of NKF’s corporate volunteers, Boscombe Life Church.

Madam Wong Ai Cheng, 90, was delighted when she saw the cute figurine, which can move its hand up and down as a sign of welcoming luck.

She studied it with interest and smiled, taking in the festive mood.

She told The New Paper in Cantonese: “I’m very happy – this is a nice atmosphere with nice food to eat. Too bad I forgot to bring my dentures so I couldn’t eat much.”

Madam Wang, who has a grown-up son and daughter and six grandchildren, said she lives alone with a maid at a nearby block.

She said: “When I can walk, I’ll come down here, probably about once or twice a week.”

She had shingles about two years ago and it affected her legs, she said, and she now needs a walking stick when she walks.

Mr Bidin Salim, 75, said he was in high spirits during and after the reunion event by NKF volunteers.

He said: “I’m very happy because I get to see my friends – Chinese, Malays, Indians. This is my first time joining a CNY celebration and it is very fun.”

Mr Bidin, who has lived alone since his wife died five years ago, goes to the centre daily.

“I always come here to read newspapers, check my blood pressure and play games,” said the retiree, who has 12 grandchildren.

The happiness on the faces of the elderly people are what Mr Lee and Madam Beh, a two-time survivor, are there for.

Madam Beh had ovarian and bladder cancer. The couple have a son and a daughter.

Instead of wallowing in self-pity, Mr Lee chose to contribute to society and he encouraged his wife to do the same.

Mr Lee, whose dialysis costs are all covered by NKF, said in Mandarin: “People help me, so I want to pay it forward by helping others.

“It is very simple – when I help others, others will be happy. I feel happier too because I’ve done something good.”

“They feel that they are more blessed than others.”