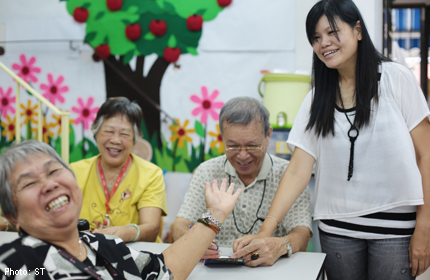 More people than ever before are volunteering in Singapore, a survey showed on Thursday.

One in three now helps out for a good cause – the first time the proportion has crossed the 30 per cent threshold.

But many volunteer only occasionally and on an informal basis, meaning it is not done via any organisation, according to the 2012 Individual Giving Survey commissioned by the National Volunteer and Philanthropy Centre (NVPC).

They also spent less time doing so, compared with the last survey in 2010.

The survey, which is conducted once every two years starting from 2000, polled more than 1,500 people aged 15 and above. Respondents were asked if they had volunteered at least once in the preceding 12 months.

The findings came as a surprise to some Singaporeans, who felt they were too optimistic.

Explaining the rise in the volunteerism rate, NVPC chief executive Laurence Lien said it was largely due to the growing number of people helping out informally. A third of volunteers belonged to this group, up from just a tenth in the last survey.

More people are also volunteering on an occasional basis, contributing to the increase. “We have to be realistic in Singapore,” he said. “For some people, ad hoc is the only way they can contribute.”

He added that the challenge for non-profit organisations is how to turn occasional volunteers into regular ones. Better management is one area to concentrate on.

While volunteering is on the rise across all age groups, it rose particularly sharply among those aged 35 to 44. Mr Lien said one reason could be that many are parents who volunteer at schools and religious organisations.

Singapore Red Cross secretary-general Benjamin William said that age group may be more established in their careers, and have a little more time to spare.

They could also have already reached the point in their lives where “they feel a need to give back to society”, he said. His organisation has a volunteer pool of roughly 4,000, of whom 90 per cent are occasional volunteers.

Still, some said they were surprised by the findings, given that Singaporeans are not known to be active volunteers.
Insurance agent Peter Lim, 36, said: “I don’t know many people who do volunteer, and with the need to balance work and family, there’s very little time left to volunteer.”

The recent World Giving Index, for instance, ranked Singapore 140th out of 146 countries when it came to volunteering one’s time. The index, compiled by British-based Charities Aid Foundation, took into account only formal volunteering over a one-month period.

But informal volunteering should be included, said National Council of Social Service chief executive Ang Bee Lian, “as long as the outcome is people helping one another”.

Besides giving time, more Singaporeans are also giving money to good causes, the NVPC survey found. Nine in 10 respondents said they had done so. But they gave less on average, about $305 each, down from $331 in 2010.

Across income levels, those in the least well-off group – earning $1,000 or less a month – gave the most in terms of percentage of their salary.

Ms Pauline Tan, a research associate at the National University of Singapore’s Asia Centre for Social Entrepreneurship and Philanthropy, said the phenomenon is not new and it is not limited to Singapore. “Studies show that poorer people, because of their own vulnerabilities, notice other people in need more,” she said.

Madam Lily Ng is among those who volunteer despite having to juggle career and family commitments. The mother of two started visiting the CARElderly Senior Activity Centre in Circuit Road two years ago to befriend senior citizens and give them facials.

The 42-year-old, who works as an operations manager at a laboratory equipment company and runs an online skincare business, said: “When I volunteer on weekday mornings, I make up for the lost time from work by staying later or working on Saturday.

“The smiles on the faces of the elderly make it all worth it. It is very meaningful to me.”