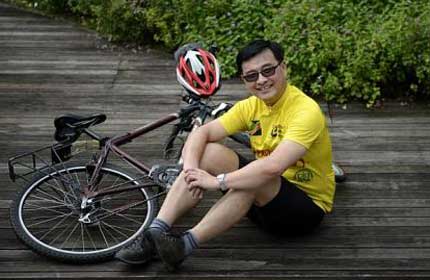 He cycles 30km to work and back home every day, just as he has done for nearly a decade. Now, he aims to cycle 5,000km from China to Singapore to raise funds for the sick.

China-based Singaporean Lim Wee Yin, 57, will be cycling in April from Guizhou in China to Singapore for Assisi Hospice.

The hospice takes care of adults and children with life-limiting illnesses.

The cycling enthusiast hopes to raise $200,000 from corporate sponsors and public donors, as well as through his own contacts.

Mr Lim, who works as a production planning and control director in an engineering firm in China, will be cycling alone for most of the journey.

He plans to ride his mountain bike from Guizhou to northern Laos, followed by Chiang Mai and Bangkok in Thailand, then to Malaysia before reaching Singapore.

His finishing point here will be St Joseph’s Institution International at Thomson Road, where Assisi Hospice will be holding its annual fund-raising event.

For the father of three, it is a “fun challenge” for a good cause.

He has been cycling actively since 2002, when he was posted to China for work. He comes back to Singapore every three months to visit his family.

He told The Straits Times: “Cycling is one of the best things to do in China, as there are many cyclists there. I was also keen to explore the towns in China. It’s a lifestyle thing, I enjoy it.”

Mr Lim cycles half an hour to work and takes a longer route when he rides home.

On top of that, he also cycles on weekends, covering about 250km on his bicycle every week.

This is not the first time that Mr Lim, who also enjoys trekking and running, will be cycling long distance.

In 2004, together with a friend, he cycled 10,000km in 100 days from Beijing to Singapore to raise funds for the Children’s Cancer Foundation and Club Rainbow in Singapore and the Shanghai Children’s Health Foundation.

Said Mr Lim: “We always take when we are young. We take from our parents, from society. So it’s time to give back to society and serve others, and there are many ways to do it.”

He added that he is looking forward to the trip, where he will be cycling through the towns on paved roads.

The biggest challenge for him will be to raise the money, which is his “main objective”.

“I don’t think I have any problem with the cycling part because I’ve been cycling a lot and I’m a safe cyclist. I will avoid the expressways.”

His wife Charlotte Seng, 50, who works as a procurement director for a telco in Singapore, said: “I’m not worried as he has done it before and he has always been an adventurous person. He’s been to many places on his own.”

She added that she is proud of her husband for cycling for a good cause.

“I’ll travel to Guizhou and will be flagging him off to give him moral support,” said Madam Seng.

Their second son, 18-year-old Shi Yuan, is also keen to join him on the final leg of his trip, from Malacca or Kuala Lumpur to Singapore.

This is the first time someone will be cycling across countries to raise funds for Assisi Hospice.

Its chief executive officer, Associate Professor Premarani Kannusamy, said: “We are deeply moved by his selfless sacrifice and generosity and we are sure that his gift of love will touch the lives of our patients and their families.”