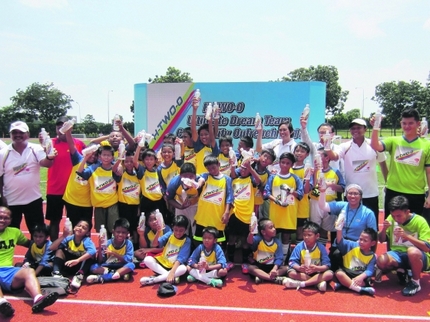 Local food and beverage giant Yeo’s last month inked an undisclosed seven-figure deal which would see it continuing as S-League’s co-title sponsor over the next three years.

The mission is simple — for players who have benefited from the H-Two-O Dream Team project to give back to the community.

Together with H-Two-O ambassadors Lionel Lewis and Isa Halim, the beverage giant will aid Fandi Ahmad and his team of coaches in providing 30 underprivileged children, between the ages of seven and 12, with football training every three months.

The one-year programme will benefit a total of 120 children from Beyond Social Services, a voluntary welfare organisation.

Fandi, who is hailed as one of Singapore’s greatest footballing sons, sees value in allowing financially disadvantaged children to train in a professional environment.

Speaking at the Institute of Technical Education’s Ang Mo Kio campus during the launch event yesterday, the 50-year-old former national striker said: “My job is to always help develop young players. But it’s also about giving back to society. I see this as being more than just football — we also get to teach the kids character and values.

“Our duty is to help produce players for Singapore football for its future development.”

Another programme that Yeo’s is planning to roll out in the near future involves women’s football. Last month, S-League CEO Lim Chin admitted it was an area that had been neglected but plans are now afoot to ensure its involvement.

May Ngiam, Yeo’s Vice-President for Marketing, said: “Women’s football will start somewhere in April and will be infused together with the H-Two-O Ultimate Champions League. Invitations will be extended to universities and polytechnics for them to play in the tournament.” Charles Ong