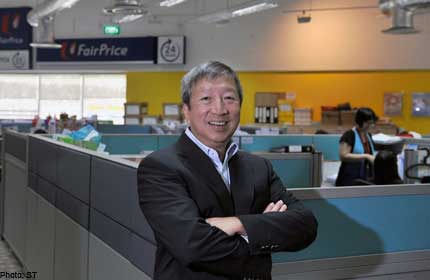 Free cookies, nuts, raisins and other snacks will be handed out from tomorrow at the *Scape Youth Park in Orchard and various tertiary institutions.

But the freebies from a mobile truck come with a catch.

You first have to promise to do a good deed, making the vow on e-tablets installed in the truck. It can be one as simple as helping family members clear the table after a meal, to as demanding as volunteering at a charity.

In doing so, the charity arm of supermarket chain FairPrice hopes young people will inspire their friends, classmates and family members to do the same.

“We hope doing good will then become second nature, a habit,” said NTUC FairPrice Foundation chairman Ng Ser Miang, on Tuesday as he unveiled the Do Good campaign to The Straits Times.

Targeted at young people, it has another feature: an online portal.

On it, young people can post their planned good deed for the day, keep a diary of deeds and share their experiences.

Taking a leaf from the Boy Scouts, badges will be given for deeds done and they can be exchanged for a wish to benefit a charity.

Mr Ng, 63, who was a scout in his youth, recalled the “small, simple things” that left an indelible mark on him, such as washing cars and painting gates to raise money for charity during Job Week.

He also remembers his university hostel roommate who made coffee to keep him awake when studying for his examinations. “The coffee had no effect on me… but if you have many such individuals in a society, it will be a better society,” he said.

Although funding for the campaign has yet to be worked out, one thing is for sure. It will be taken later this year to schools and FairPrice’s larger supermarkets, with counters set up for people to pledge their good deeds.

Also, young people can offer ideas on charity projects to the foundation for funding.

Funding amounts and the type of project will be kept flexible, said Mr Ng.

“We don’t want to pre-empt what youths can come up with,” he told The Straits Times. “Youths are full of ideas, we just need to motivate them to take action.”

The Do Good campaign is the foundation’s first foray into what the father of three calls its “action project” phase.

Until now, the five-year-old foundation has been disbursing funds directly to charities like The Straits Times School Pocket Money Fund.

It has given out more than $40 million from its $62 million fund, which gets about 10 per cent of the profits of the supermarkets.

It will also pay for the new campaign which has already received the support of the Singapore Scout Association, which has members in more than 180 schools.

The association has lined up 15 scouts to pledge a good deed on the online portal, said its spokesman Koh Kar Meng.

“Most of the time when scouts do a good deed, they keep it to themselves. This is one way of sharing, and helping to spread the message,” said Mr Koh, 60, a teacher and scout leader at Bishan Park Secondary School.