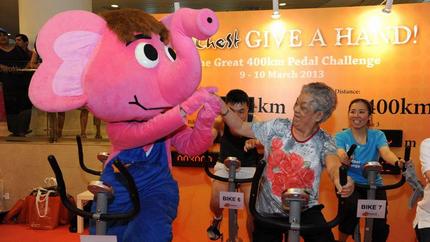 Several celebrities, Speaker of Singapore’s Parliament, Halimah Yacob, CEO of NTUC Fairprice and MP for Marine Parade GRC, Seah Kian Peng pedalled their way on bicycles to raise funds for the Community Chest – all part of the ComChest Give A Hand! 2013 Roadshow held at the AMK Hub on Saturday.

The public also did their part for charity by donating a minimum of S$2 to pedal on the stationary bikes for up to 15 minutes while corporate partners pledged a dollar for every metre they cycled.

Among those who took part were Singaporeans with disabilities.

Speaking to the media, Madam Halimah shared her thoughts on Budget 2013.

She said one programme that she welcomed was the Learning Support Programme (LSP) to help weaker students level up in school.

Madam Halimah said: “The LSP in school was a very critical part of it because the focus hitherto is you have a standard curriculum, a standard method of teaching and then for the weaker students you have LSP in primary one and two and that was my point also and then you had a system where the self-help groups coming to support. It was a bit grafted. I think it wasn’t, in my view, sufficient and when I was an MP, I had said it should be strengthened.

“I am very happy that the Ministry of Education has strengthened the LSP, going to expand it to primary and upper primary. 600 teachers, that’s a huge investment in qualified teachers because only when you have it in the system itself, you stand a better chance of giving them a strong foundation.

“I hope the ministry will not just have at primary level for LSP, they should expand it to secondary level for the weaker students as well so that students within the school get the support that they need for their academic achievements.”