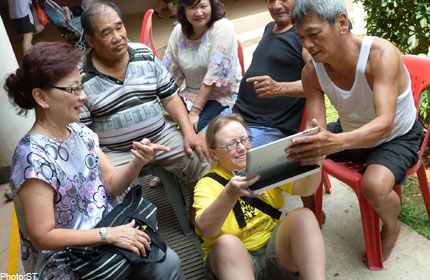 For the past two months, IT consultant Robin Ann Rheaume has been roaming the streets of Singapore taking portraits of strangers.

A 70-something hairdresser tending to a customer in Chinatown, three big-bellied butchers chilling out at Tiong Bahru market, an earnest boy scout at a hawker centre in Serangoon Gardens, a cheery Catholic nun at Waterloo Street.

The individuals she captures are as diverse as they are unique.

The former investment banker uploads these snapshots and anecdotes about her subjects onto The People of Singapore (POS), a Facebook page she created to capture the textures in the fabric of Singapore life.

She hopes it will help to debunk the Singaporean stereotype.

“There is this amorphous, greedy and kiasu stereotype created of the Singaporean which I believe is not quite accurate,” said the Canadian-born Singapore permanent resident, who has lived here for the last 20 years.

She also hopes her photos will provoke discussion about issues such as national identity.

“I wanted to participate in the national conversation but I felt it shouldn’t involve my face or my voice,” said Ms Rheaume, 48.

She modelled her page on the Humans of New York project started by American photographer Brandon Stanton in 2010.

The project had attracted more than half a million followers on Facebook as of January.

She has kept POS low-key but it has attracted more than 600 “likes” since it was launched in February.

Editorial assistant Dan Koh, 25, described the page as a simple but great idea. “It’s very casual but very genuine and very heartfelt,” he said, adding that he was surprised it was the initiative of a foreigner.

The mother of two young boys said: “What I like is that she takes the auntie, uncle and Ah Soh in the street – folks whom we may easily dismiss – and frames them to show how every person is a unique individual with a story to tell. It’s like ordinary people made extraordinary.”

Indeed, that is a key reason why Ms Rheaume started POS.

Starting POS, she said, is like going into the wardrobe in the C.S. Lewis children’s classic, The Lion, The Witch And The Wardrobe.

“You go through this secret passage and suddenly you’re in this parallel dimension which has been there all the time and it’s full of interesting people with interesting stories. They were there walking among us all the time but we just didn’t notice.”

She came to Singapore to work at a bank in 1992 and felt at home immediately. “I can’t put a finger on why I fell in love with Singapore. I just did,” she said.

At one time the regional head of credit risk management for a foreign bank, she left banking after the financial crisis and became an IT consultant as she was adept at social media and programming.

She now works as a consultant for a local IT company and also helps to build systems and programs free of charge for non-profit organisations.

Effervescent with a competent grasp of Singlish, Ms Rheaume found the going hard when she first started POS.

“I didn’t know what to do or where to go, so I started with Orchard Road, which is just about the worst place to go to. Besides, half the people on Orchard Road aren’t even Singaporean,” she said.

She was rejected by many of the people she approached.

Her break came when she got a scoop.

She heard a rumour that Chin Mee Chin, the old bakery in Katong, was going to close so she headed there with her camera.

“I took a picture of the aunty there and she said no, it was not closing. I went home and put the picture up and more than 40,000 people saw it,” she said.

The response convinced her she was on to a good thing.

She ventures out whenever she can to shoot pictures of interesting folk she comes across.

A friend often goes with her to help with translation.

The feedback to the more than 100 portraits she has posted so far has been overwhelmingly positive and encouraging.

Ms Rheaume said she does not hesitate to remove negative comments.

“I really do not want people whose pictures show up here to be subject to nasty comments and regret being part of this,” she said. Meanwhile, getting people to open up to her has become a lot easier.

“If you are nice to people, you make their day so it’s a really worthwhile endeavour. And you’ll find there is a limitless supply of really cool people out there.”