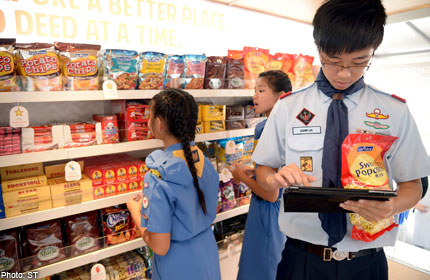 The Giving Store, a roving truck stocked with free munchies, made its debut at Plaza Singapura shopping mall on Thursday.

Its gift of cookies, raisins and nuts to anyone who promises to do a good deed swiftly drew a growing crowd, with at least 500 pledges made on e-tablets installed on the truck.

A throng of students from various interest groups – including the Singapore Scout Association – were also present at the noon-time launch.

The truck is part of the Do Good campaign, an initiative by the NTUC FairPrice Foundation – the charity arm of supermarket chain NTUC FairPrice.

Education Minister Heng Swee Keat, who was at Thursday’s event, said the campaign “allows our youth to proactively think for themselves what a good deed is, and then act on it”.

The truck will appear at various locations in the next few months, including *Scape Youth Park in Orchard and tertiary institutions.

NTUC FairPrice Foundation chairman Ng Ser Miang said he hoped the move will spark a momentum, like the Kallang Wave, “to transform Singapore, deed by deed, into a gracious society”.

Young people can also post their planned deed for the day and share their experiences on an online portal.

Pledges made on Thursday include volunteering in an old folks’ home and standing up for someone being bullied at school.

Bishan Park Secondary School student Nicholas Wong vowed to help an elderly person carry his or her groceries on Sunday in exchange for a packet of Skittles.

“I will carry the groceries all the way to their home,” said the 13-year-old, adding that he will post his experience on the online portal. “Maybe that will inspire others to do good deeds, too.”