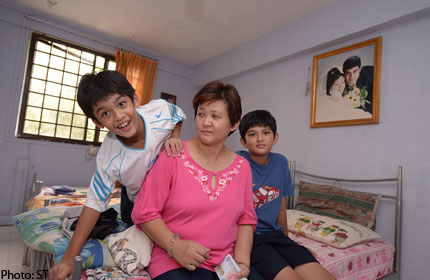 Madam Yvonne Chan, 48, knew for a long time that she needed to buy new furniture, such as tables, for her two children. She would share the kitchen table with her sons, aged nine and 11, who used it to do their school homework.

But as she earns less than $1,000 a month, from the three jobs she juggles – including being a supermarket retail assistant – after her husband died of a heart attack four years ago, Madam Chan never made the purchases in the end.

“My boys are still growing up, so I have to buy essentials such as food first before even thinking about furniture. I have to watch our expenses,” she said.

However, her worries eased yesterday after home-grown retail giant Courts donated about $5,000 worth of household items – including new tables and beds – and grocery vouchers to Madam Chan’s family.

The household items and grocery vouchers were given to Madam Chan yesterday at her three-room flat.

Heartware Network, a voluntary welfare organisation, had identified Madam Chan’s family as one of 10 needy families to be the beneficiaries of a project with Courts. Some $52,000 worth of goods were given to the 10 families.

The funds were raised through a campaign launched by Courts in December last year, in which the company contributed $1 for every “Like” pledged on its Facebook page.

Courts also donated $5 for each of the 10,028 hours of volunteer work clocked by Heartware Network’s volunteers.

Acting Minister for Social and Family Development Chan Chun Sing, who witnessed a $52,000 cheque presentation yesterday to Heartware Network from Courts to purchase the household items, urged more companies to help the needy.

Citing Courts as a role model, he called for firms to help, counsel and advise needy families on financial prudence.