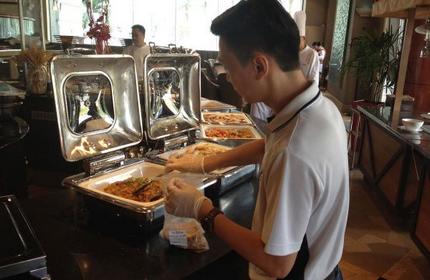 The Food Bank Singapore is appealing to hotels and restaurants to donate excess cooked food.

Its new Food Rescue Project aims to collect cooked food that does not end up on plates – such as unconsumed rice and noodles from buffets and banquets- and distribute it to the needy within the same day.

The non-profit organisation aims to launch the initiative by the end of the year, and is in discussions with several hotels as well as food and beverage outlets.

The group’s co-founder Nichol Ng told The Straits Times: “We have been working on this for more than one year but it has been tougher than expected to convince people to come on board. Many are cautious as cooked food has a shorter shelf life.”

To ensure that the food is safe for distribution, the organisation is pumping in about $100,000 to run lab tests to assess its bacteria.

“We are not taking this process lightly,” Ms Ng said.

In March, the National Environment Agency (NEA) announced that it will develop guidelines with the Agri-Food and Veterinary Authority for the proper handling and re-distribution of unsold and excess food.

NEA said food waste accounts for about 10 per cent of total waste generated, but less than 15 per cent of it is recycled.

Hotels keen to be part of the Food Rescue Project include Hilton Singapore, Conrad Centennial and Fullerton. Samples of food have been taken from the latter two for tests.

A spokesman for Hilton and Conrad Centennial said: “Waste reduction is a key focus of our sustainability efforts and globally we have invested in multiple organisations… to support our hotels’ efforts.”

At both hotels, about 20kg of buffet breakfast food goes unconsumed every day along with up to 30kg each of the lunch and dinner buffet spreads.

A Fullerton spokesman said: “While we seek to ensure minimal food wastage in all our restaurants, we recognise that we can donate safe food to benefit the needy.”

Two voluntary welfare organisations have already signed up to be beneficiaries, and more are expected to do the same.

Teen Challenge Singapore, a halfway house, has 30 residents and 22 staff members. The average cost of a meal per day is $3 per person, and its executive director, Mr William Chua, believes that with The Food Bank’s help the total cost could be “easily reduced”.

Mr Koh Guan Huat, centre manager of fellow beneficiary Moral Seniors Activity Centre (Kaki Bukit), said: “It will certainly help to lessen the financial burden, and also food can be delivered to their doorstep which is helpful to the frail elderly.

“We will check the food before distribution to avoid any issues, but we do hope the food given to the elderly will be in its best condition.”

For details of how to take part, e-mail: enquiries@foodbank.sg