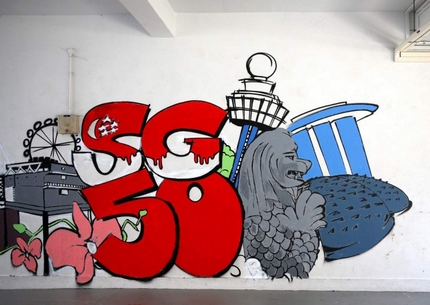 But she picked up a brush anyway and helped paint murals at Block 45, Telok Blangah Drive last Thursday.

Madam Hwee, who is in her 30s, works for Shell Eastern Petroleum (Shell) and was one of 180 volunteers from the company who painted 50 murals at the block as part of Let’s Paint! Singapore @ South West.

This is a programme that promotes volunteerism to decorate spaces around the community.

The murals were unveiled by Minister for Trade and Industry Lim Hng Kiang last Saturday.

These paintings have nine themes such as women’s contributions to society and being good neighbours.

They also show life in Telok Blangah and depict milestones in Singapore’s history to celebrate SG50.

Madam Hwee, a human resource account manager, said: “This project really speaks to my heart. I’m proud to work for a company that wants to give back to the community, which is something I feel strongly about.

“It also gives us a chance to bond as colleagues. I very much wanted to be a part of it, so I didn’t care (about my allergy).”

Madam Hwee’s allergy causes her to have itchy spells when around wet paint. She had to take medication and wore protective gloves and goggles while painting.

Despite an itch, she persevered and painted a pillar that showed people of different races celebrating Hari Raya together.

She said: “It was a new experience for me and I think it was really fun. Looking at the murals made me happy and the colours enlivened me. I hope it will enliven the residents too.”

She worked with Mr Jonathan Ng, 39, and four other Shell volunteers on the pillar.

Mr Ng, a process safety manager, added: “I think our mural is very important as it shows multi-cultural Singapore. The designs are nice because they depict typical community life.”

The murals concepts were developed by Built from Skratch, an educational entertainment company that gives classes on dance, music and art.

It was engaged by the South West Community Development Council (CDC) one month ago to work on the murals.

Their team spent three to four nights outlining the murals for the Shell volunteers to paint and bought about 50 litres of paint for them to use.

The volunteers painted on Thursday afternoon and Saturday.

Mr Jason Leow, general manager of external relations of Shell in Singapore, said they hoped the murals would remind the young of what Singapore has achieved in the past 50 years.

A resident of the block, taxi driver, Mr Faizal Sani, 31, said he would show his 10-year-old son the murals.

He said: “It brightens up the void deck.

“Before, it was very plain, but now, there are things to look at.

“I can walk there with my son and teach him through the paintings.”