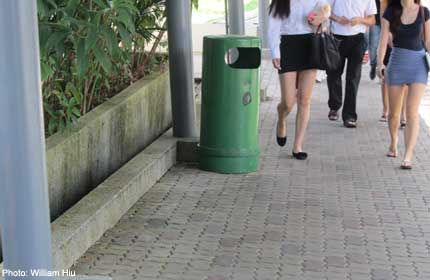 The picture above may look unremarkable if you do not know who took it and why.

It was taken by Mr William Hiu, 58, who is visually impaired.

And it shows an object which most of those walking past may not notice at all – a dustbin.

But to Mr Hiu, it is something important.

“There was this time when the cleaners moved this dustbin at Ngee Ann Polytechnic and I became totally lost,” he said with a laugh.

The dustbin tells him where exactly he is; when he reaches it, he knows he has to turn left to continue walking to his workplace at the polytechnic.

There is also a picture of railings taken by Mr Hiu. Again, it may seem insignificant to the uninitiated, but to Mr Hiu, these metal structures help him keep on track while he jogs at a park connector.

To raise awareness of how visually impaired persons (VIPs, as they are called) live their lives, five of them from the Dialogue In The Dark project at Ngee Ann Polytechnic are embarking on a photo journey, attempting to tell what the blind “see” in their lives.

With the help of ex-Lianhe Zaobao photojournalist Bob Lee, 36, the VIPs went through a photography crash course before they began snapping away.

Although Mr Lee has been conducting photography workshops for the last seven years, teaching a class of visually impaired students is something foreign to him.

“It felt as if I am the student when I am teaching this class, because teaching photography to the VIPs is something totally new to me,” he said.

But photography is not something totally new to Mr Hiu.

Before his eyesight started to fail due to retinitis pigmentosa – a condition in which the retina fails gradually – about two decades ago, he had dabbled in photography.

He said: “Back then, I joined photo societies and shot various genres, such as portraiture and food. “But when I learnt about my failing eyesight, I gave up hope in everything.”

He was so depressed that he threw away the single-lens reflex camera he used to own, as he refused to accept his disability.

Fast forward to today and Mr Hiu is a much more cheerful person, and he hopes to tell the world how the blind live in this visual world.

The participants of the project point their cameras in the general direction of the object they want to shoot and snap away.

Another participant in the project is Mr Jason Setok.

For the 33-year-old, it is all about reliving his first date with his girlfriend after losing his eyesight to glaucoma about six years ago.

So he and his girlfriend, who is also visually impaired, went on the Singapore River Cruise, and he took a series of photos of the Singapore skyline.

He said: “On my first date, we walked around the Marina Bay area and the usual touristy sites.

“If I could ever regain my eyesight, the first thing I want to see would be my girlfriend and this place where it all started.” 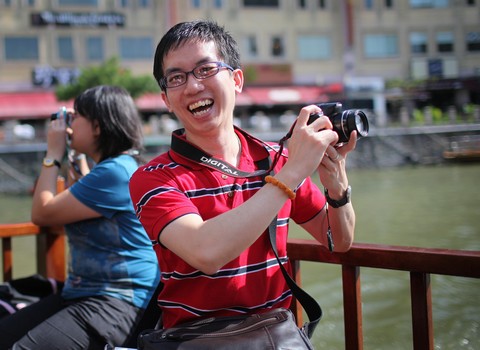 Mr Jason Setok, who is visually handicapped, taking photographs while he was on a Singapore River Cruise. Mr Setok, who lost his sight to glaucoma, is one of the participants of Dialogue In The Dark 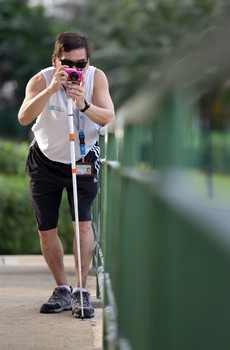 Mr William Hiu, who is visually handicapped, taking photographs. He is one of the participants of the Dialogue In The Dark project at Ngee Ann Polytechnic.

The participants of the project point their cameras in the general direction of the object they want to shoot and snap away. Before taking the photographs, they went through a photography crash course conducted by Bob Lee, a former photojournalist with Lianhe Zaobao. 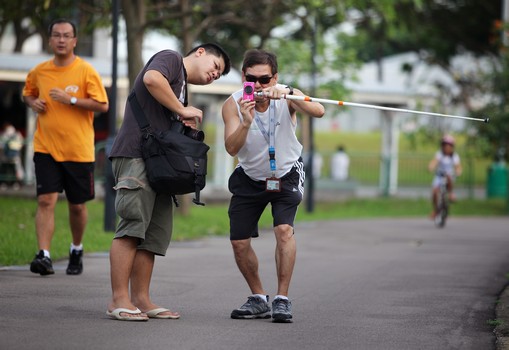