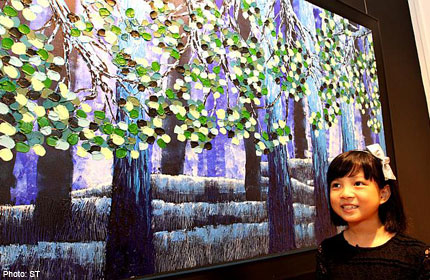 Called My Dreams, My Wishes Part II, it features 22 acrylic paintings, mainly of trees and flowers. The first edition raised almost $100,000 for the foundation, which grants wishes to children with life-threatening illnesses.

“(After the first exhibition), I felt very happy because I could help to grant more wishes,” said Gelyn, the oldest of three sisters. She began preparing for the second exhibition shortly after her first one in November last year and paints about three times a week.

Her own dream and wish is that “every one of us will stay healthy… and to help the less fortunate children”.

One of the “wish children” at the launch on Wednesday was Chelsea Fairclough, who is paralysed from the neck down.

The 14-year-old’s wish to swim was granted last year by the foundation, which took her to a pool and helped her in the water.

Chelsea is also an artist. Despite being unable to use her hands, she paints with the wheels of her wheelchair, which she controls by moving a joystick with her mouth. After attending Gelyn’s first exhibition, she decided to hold one of her own on May 10 to raise funds for the foundation.

Gelyn, who attended Chelsea’s exhibition, said: “It was amazing to see that her paintings were really nice, even though she cannot use her hands.”

The eight-year-old does not intend to stop at art exhibitions. She is writing and illustrating a book for pre-schoolers. It is expected to be completed by the end of the year and proceeds will go to the World Wide Fund for Nature Singapore.

Her exhibition is on until next Tuesday at Redsea Gallery in Dempsey.