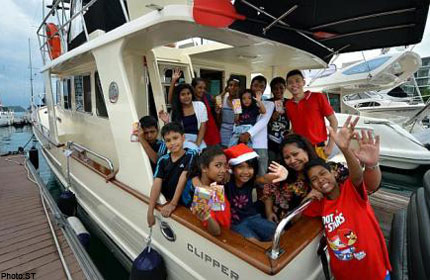 The 15-year-old said he would normally only get a present on his birthday, but this year he got a second gift – a voyage out to sea with his family.

The two-hour trip was laid on by 28-year-old Hoe Zong Huan, who owns an events company, after he was introduced to them by voluntary welfare organisation Beyond Social Services.

Alif, who was joined on the trip by his mother, two sisters and brother, said: “It’s nice to get a Christmas present, even though it’s for a holiday I don’t celebrate.”

Mr Hoe forked out $900 to take them and two other families on the trip, which included a stopover at Lazarus Island.

He said: “Going out on a yacht, it’s not something that lower-income families can afford, but I also wanted them to experience what it’s like being out at sea.

“Three families was all I could afford this time, but I hope to take more in future.

“I hope I can lead by example, and that other young Singaporeans will also help those in need if they can.”

Alif’s mother, Madam Noraidah Helmee, 33, said: “It’s the first time my children are getting a chance to be out at sea, and we did not know that such a beautiful island existed.”

It was also the first time out at sea for Madam Sasha Shamsiah, 32, who turned up for the trip with her husband, cousin and two daughters.

The 32-year-old housewife said that as her husband is normally busy at work, this was a rare opportunity for everyone to be together.

“Even though I got slightly seasick, I would love for the opportunity to go out to sea again. It was so relaxing and I even found myself dozing off.”