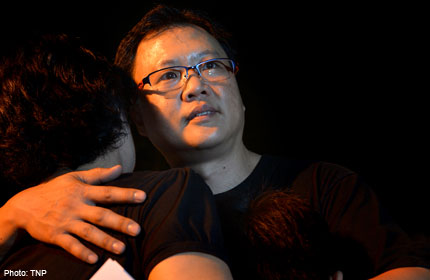 He is an ex-convict who is reaching out to family members of those currently doing time.

“I know how they feel because my own family has been through that journey,” says Mr Leslie Khoo, 45.

He and his wife are two of about 200 volunteers who deliver hampers in the weeks before Christmas.

Their notes are tagged onto goodie bags, which are hand-delivered by volunteers to their homes.

Mr Khoo, who is married with an eight-year-old son, spent six months in jail in 2004 after being convicted of criminal breach of trust – he had been caught for forgery.

Last year, he was found guilty of a similar offence and spent another 16 months in jail.

Describing his former self, he says: “I liked to gamble, smoke and drink, and committed adultery.

“I was a great liar. I cheated people to get money and pawned my wedding ring without asking my wife… among other things which have hurt her immensely.”

He is now a changed man, he claims, after encountering God in prison.

Unsurprisingly, both husband and wife have a soft spot for the families of prison inmates.

Says his wife, who declined to be named: “I was a beneficiary of the Angel Tree Project last year. It was not the items in the hamper which made a difference – I could well afford the biscuits and snacks.

“It was more the fact that complete strangers reached out to encourage me and prayed for me when I had no one but God to turn to,” says the devout Christian.

“I understand how the families of prison inmates feel because no matter what people say, there is always that mark (stigma).

“I didn’t dare to tell anyone that he was doing time. I simply said he was on a work trip… I was afraid that people would look down on me and that my job prospects would be affected,” she says.

Mr Khoo was released from prison in September. His family decided to return the good deed this month by visiting a family who had a female relative in jail.

“When my husband shared about how he found a job after being released from prison, the eyes of the inmate’s mother widened with hope,” she says.

“It’s like light came back into her eyes. Being able to give them some hope that there is life after prison – that was the most meaningful,” adds Mr Khoo, who also visited two other families.

These days, he works as a general manager at a laundry shop and has about seven employees under him. Mr Khoo’s rise to his current position is nothing short of miraculous.

A week after his release from prison, he spotted an advertisement in the newspapers – his company was looking to hire manual labourers.

“I told my bosses about my prison record, but they were still willing to take me,” he says.

On the third day of work, he was promoted to operations manager of the company as the man who previously held the post had quit.

About two months later, he was promoted yet again. This time, to general manager.

“It was my boss’ decision… perhaps he felt I could do the job and was willing to give me a chance?”

Currently, Yong Lee Laundry Services has three employees who are ex-convicts, all of whom were hired by Mr Khoo.

“It’s not common that ex-convicts get opportunities like mine, which is why I want to reach out to more of them by offering them a job and sharing my own experiences.

“I hope to be able to make a greater impact on the way society views ex-convicts. Movements like the Yellow Ribbon Project have made a difference, but there is still a long way to go,” he says.