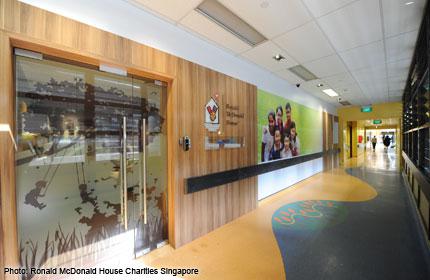 A charity-run home where parents can stay for free while their children undergo treatment opened on Tuesday at the National University Hospital (NUH).

The Ronald McDonald House is down the hall from NUH’s paediatric and children’s wards.

Run by the charity of the same name with financial support from fast-food chain McDonald’s, the facility has four rooms, is open 24 hours and is staffed by volunteers and full-time workers.

“We’re there so that families can find a place to sleep that is safe and comfortable, where they can get refreshments and shower in the comfort of their own rooms,” said Ms Barbara Murphy, president of Ronald McDonald House Charities Singapore.

“They just have to worry about their sick child, concentrate on helping their child get well and we take care of everything else. That’s the basis of the Ronald McDonald House: It’s a home away from home for families with seriously ill children.”

Of the 322 such homes worldwide, it is only the 10th to be run out of a hospital. If the house is full, priority goes to local parents, based on the severity of each case.

Doctors at the hospital recommend suitable cases to the charity after carrying out an assessment.

Ms Murphy said most of the funding has come from generous Singaporeans, who have left around $400,000 a year in restaurant coinboxes in recent times. This number compares favourably with the average figure of around US$10 million (S$12.3 million) a year from coinboxes worldwide.

A Ronald McDonald Family Room – actually made up of 12 rooms – run by the KK Women’s and Children’s Hospital (KKH) had operated from 2007, helping about 2,000 families before closing last May to make way for a specialist outpatient clinic. The residence charged Singapore citizens $45 a night and foreigners $90.

While the house at NUH will be smaller than the Family Room at KKH, the charity is confident that it will meet the expected great demand, said Ms Murphy.

The new home has been welcomed by parents whose children face medical difficulties.

Househusband Peter Chua made the difficult choice of transferring his twins, who were five weeks premature, from Mount Alvernia Hospital to NUH when they were just three days old, otherwise he would have faced big hospital bills.

He said the facility would have spared him from shuttling back and forth from his home in Punggol to the hospital twice a day.

“My wife had to pump milk, and the next morning I would bring the frozen breast milk to the hospital,” said the 57-year-old. “If this kind of accommodation was available, my wife wouldn’t have had to recuperate at home; she could have stayed in the hospital with the children.”

Father of four Al Sidhom, 44, “felt forced” to get his four-year-old daughter a single room when she contracted pneumonia in December.

The IT manager said: “If I got a shared room, I am sure we would have inconvenienced the other people. With such a facility nearby, I wouldn’t have had to bring my kids to the ward and my daughter could have been like any other patient.”

Ms Murphy, who volunteered at the first house in Philadelphia in 1996, hopes that more Singaporeans will volunteer to help the charity. She hopes such facilities “will give families a chance to walk out of a sick ward and go into a room where they can find a little bit of relaxation and reprieve”.